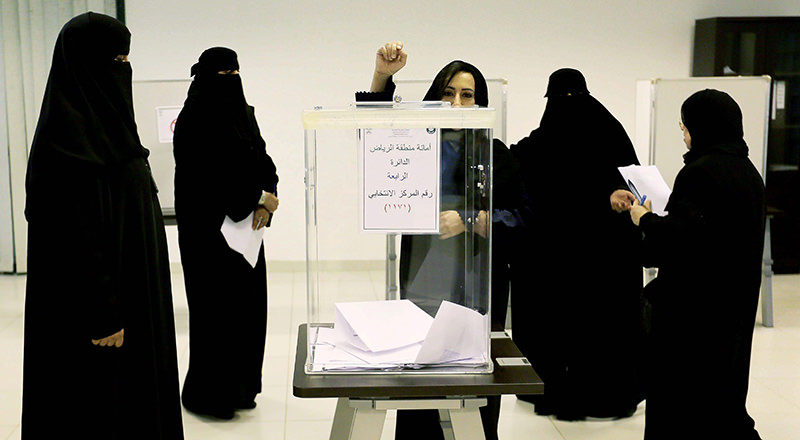 The first women candidates were elected in Mecca and Jeddah while thousands of women voted for the first time in an election. The right move is considered a significant development for women rights issues in the conservative kingdom

Women across Saudi Arabia marked a historic milestone on Saturday, both voting and running as candidates in government elections for the first time. At least 19 women won municipal council seats in Saudi Arabia's first ever election open to female voters and candidates, officials said Sunday, far exceeding expectations in the ultra-conservative kingdom.

The women who won hail from vastly different parts of the country, ranging from Saudi Arabia's largest city to a small village near Islam's holiest sites.

In the first announcement of a female winner, Salma bint Hizab al-Oteibi was elected in the holy city of Mecca, the official SPA news agency reported.

Winners came from the south as well, with one woman elected in Jazan region, while two others including Lama al-Suleiman will join councils in Jeddah, the kingdom's second city, local election officials cited by SPA said.

Saudi Arabia's second largest and most cosmopolitan city, Jiddah, elected two women, as did one of the most conservative regions, Qassim.

The conservative capital of Riyadh saw the most women candidates win, with four elected. The Eastern Province, where minority Shiites are concentrated, saw three women elected.

Other women hailing from the kingdom's northernmost areas won, with two elected in Tabuk, and one in al-Jawf. Additionally, a woman won in Saudi Arabia's southern border area of Jizan and another won in al-Ahsa.

"Even if it was only one woman, we're really proud of that. Honestly, we weren't expecting anyone to win," said Sahar Hassan Nasief, a women's rights activist in the Red Sea city of Jeddah.

But with 2,106 seats up for election, the 19 women will comprise less than one percent of Saudi Arabia's elected council membership.

Despite the positive development, just outside polling stations women waited for male drivers a reminder of the limitations still firmly in place. The landmark election for local council seats was not expected to immediately advance the status of women in Saudi Arabia, who are still not permitted to drive, but it seen as a chance for them to make their voices heard as citizens. "We are making history. I just made history," said candidate Karima Bokhary, 50, after casting her ballot at a polling station in the capital Riyadh. Bokhary was one of 979 women candidates vying for a seat on the country's municipal councils, the only government body in which Saudi citizens can elect their representatives. An additional 5,968 male candidates were running in the election. There is no quota on the number of female council members.

More than 130,000 women registered to vote, compared to 1.35 million men. The General Election Commission estimated there are at least 5 million eligible voters out of a population of 20 million, but the figure could be much higher. At a polling center in Riyadh, Shara Al-Qahtani, a 50-year-old mother of eight, wearing a loose black dress known as an abaya that all women must wear in public and a traditional veil covering her face and hair, said women being allowed to vote "is good for people and good for society ... Women are partners of men." Najla Khaled, a 24 year-old English literature major, described voting "as a huge step for women in Saudi."Though women make up just 10 percent of registered voters, the right to simply cast a ballot sends a wider message to society, she said. "If you look back at the history of women (in Islam), there are so many strong women," she said. "The Prophet (Muhammad) worked for his wife Khadija. The prophet's wife was his boss technically."

The election tested just how far the kingdom's conservatives were willing to bend while bringing to the fore more liberal voices advocating for greater freedoms and reforms. In line with Saudi Arabia's strict gender segregation rules, men and women cast ballots at separate polling stations. During the campaign period, female candidates could not directly address male voters and had to either present their platforms from behind a partition, relying on projectors and microphones, or through male supporters and relatives presenting for them. The candidates were vying for about 2,100 council seats. An additional 1,050 seats are appointed with approval from King Salman, who could use his powers to appoint female candidates who don't win outright. The candidates serve four-year terms that begin on Jan. 1.

While the municipal councils do not have legislative powers, they oversee a range of community issues, such as budgets for maintaining and improving public facilities. All major decision-making powers rest solely in the hands of King Salman and the all-male Cabinet of ministers.

The first local council election since the 1960s to be held in Saudi Arabia was in 2005 and the second in 2011, with only men taking part. The late King Abdullah granted women the right to participate in elections before he died in January. He also appointed 30 women to the country's top advisory Shura Council, which laid the groundwork for women to take part in municipal councils. Few clerics have dared to openly criticize the royal decree to allow women the right to vote, and in mosques across the kingdom Friday, there appeared to be no mention of the election in sermons.

Only 1.48 million Saudis from a population of 20 million registered to vote in the election, the widespread apathy partly the product of a poll with no political parties, strict laws on campaigning, and in which only local issues are at play. Some voters hope that the Al Saud will eventually allow elections for the advisory parliament, the Shura Council. "There is no reason, if this is applied to municipal councils, that they would not apply it to the Shura," said Riyadh Najm, a retired former government official in glasses and a neat grey beard. The Al Saud has not made any announcements to this effect but it is being discussed in private, according to analysts. At the King Salman Social Centre in north Riyadh, where men and women went into different parts of the building to cast their ballots, voters of both sexes were greatly outnumbered by both election officials and journalists. Dozens of prospective candidates were barred from running. The authorities gave no reason for not allowing them to participate, but many had previously been politically active, including advocates for women's driving and the advancement of the Shiite Muslim minority.
Last Update: Dec 13, 2015 9:33 pm
RELATED TOPICS