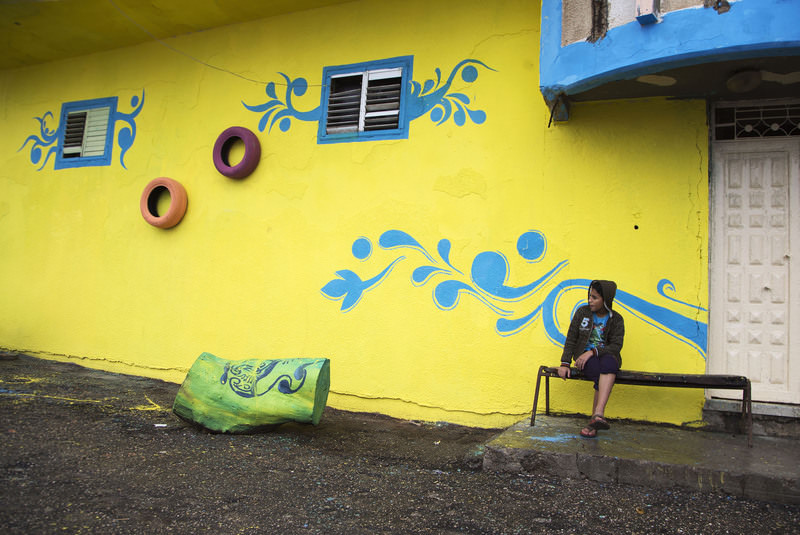 A Palestinian boy sits outside his family house that was painted by Palestinian artists in the al-Shati Refugee Camp in Gaza City, Tuesday, Nov. 17, 2015. (AP Photo)
by Anadolu Agency Dec 13, 2015 12:00 am
At the Al-Shati refugee camp in the northern Gaza Strip, the streets and walls of many of the homes have been splashed with color by 30 painters in an effort to bring some cheer to an area usually associated with war and poverty.

The "Better Gaza" campaign is aimed at giving the Al-Shati camp -- home to some 82,000 Palestinian refugees -- a new face by adorning its homes and public spaces with colorful images of trees, flowers and butterflies.

But while camp residents are pleased with the new, cheerful appearance of many of their homes, Al-Shati nevertheless remains haunted by the specter of poverty and privation.

Bahgat Abu Hamad, the father of eight children, likes the cheerful images of orange and purple flowers that now adorn his once-gray home.

"But the pretty paintings will neither improve our deplorable living conditions nor provide me with a job or food for my family," he laments.

"Our house is colorful on the outside but it remains dark on the inside as we continue to struggle with poverty and our chronically tough circumstances," says Abu Hamad.

"Nevertheless," he adds, "the bright and beautiful colors have made many of us happy, especially the children."

Eleven-year-old Nidal Semir, for one, loves the new paintings.

"I can't believe how pretty they are," she said when she first saw the bright flowers and butterflies on the wall of her family home.

Nine-year-old Raed Bekr also loves the new look of his home, but adds, "I wish they had painted the inside of the house as well."

According to campaign coordinator Dalia Abdurrahman, "Better Gaza" aims to revive hope among struggling camp residents who in recent years have had little to smile about.

"The message we're trying to deliver is that the Palestinians of the Gaza Strip still have a longing for life," Abdurrahman said.

According to a September report issued by the UN Conference on Trade and Development (UNCTAD), the Gaza Strip could become uninhabitable by 2020 if current economic trends -- and an ongoing blockade by Israel and Egypt -- persist.

In May, the World Bank warned that the Gaza Strip's unemployment rate had reached a whopping 43 percent -- the highest in the world.

Nearly 80 percent of the strip's roughly 1.9 million residents rely on social security benefits, the bank noted, while 40 percent lived below the poverty line.

Ever since the Hamas resistance movement took over the strip in 2007, Israel has imposed a crushing embargo -- by air, land and sea -- on the coastal enclave.

Egypt, meanwhile, has kept the Rafah crossing -- Gaza's only border crossing not under Israeli control -- tightly sealed, while destroying the cross-border tunnels that Gazans rely on to import desperately needed food, fuel and medicine.

To make matters worse, more than 2,150 Gazans were killed in the summer of last year -- and vast swathes of the strip's infrastructure destroyed -- by a punishing Israeli military onslaught that went on for 51 days.
Last Update: Dec 13, 2015 7:35 pm
RELATED TOPICS