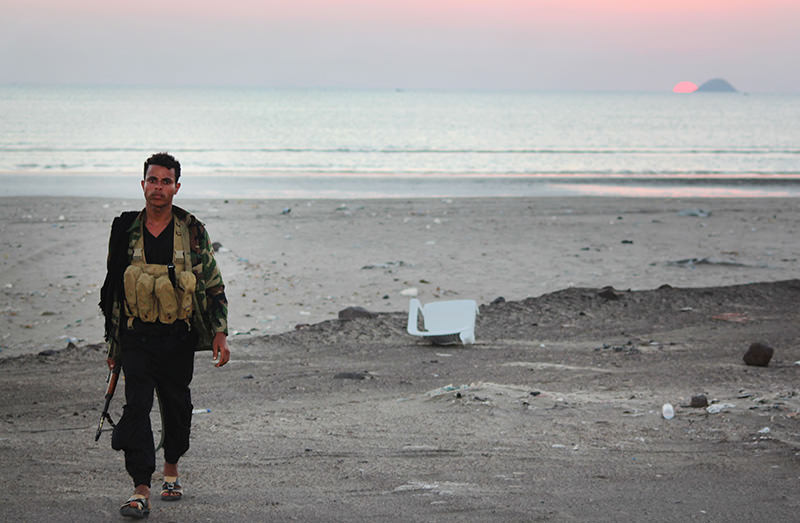 A Yemeni fighter loyal to Yemeni President Abedrabbo Mansour Hadi walks at the beach in Dabab district in Taez province, on Dec 13, 2015 (AFP photo)
by Daily Sabah with AFP Dec 15, 2015 12:00 am

A cease-fire took effect on Tuesday in conflict-ravaged Yemen as warring sides began U.N.-brokered peace talks in Switzerland, according to the United Nations and the Saudi-led coalition battling Iran-backed rebels.

Limited violations of the truce were reported shortly after it began at midday, with several mortar rounds hitting government forces in the southwestern province of Taez, according to a Yemeni security official. The Saudi-led coalition, which launched an air war against the Shiite Houthi rebels and their allies in March, said the cease-fire had started as scheduled following a request by Yemeni President Abedrabbo Mansour Hadi. The rebel forces, who control the capital, have yet to say if they will abide by the truce.

The U.N. envoy to Yemen, Ismail Ould Cheikh Ahmed, hailed the halt in fighting as "a critical first step towards building a lasting peace in the country." He said that the talks in Switzerland "seek to establish a permanent cease-fire and pave the way for a return to a peaceful and orderly political transition."

U.N. spokesman Ahmad Fawzi confirmed that the talks had begun at an undisclosed location. "The U.N.-sponsored consultations aimed at finding a durable settlement to the Yemen crisis started today in Switzerland," he told reporters. "These consultations seek to establish a permanent and comprehensive cease-fire, secure improvements to the humanitarian situation and a return to a peaceful and orderly political transition," he added.

Fawzi said 12 negotiators and six advisers made up each of the two delegations taking part in the talks. Ahead of the truce, clashes shook the flashpoint city of Taez and coalition warplanes bombed rebel positions. Even after the cease-fire took effect, a Yemeni security official reported five mortars targeting pro-Hadi forces in Shuraija, south of Taez. Residents reported hearing shelling in the city.

The coalition has warned that it "reserves the right to respond in case of any violation." Hadi has declared his government's intention to have a seven-day truce to coincide with the peace talks and to be "renewed automatically if the other party commits to it," the coalition said.
A Yemen presidential statement said the proposed cease-fire "comes out of keenness to grab any chance to achieve peace, to reduce the suffering of our people in Yemen and to end bloodshed."

Yemen's conflict pits pro-government forces backed by the coalition against the Houthis and renegade troops loyal to ex-President Ali Abdullah Saleh. Previous U.N. efforts have failed to narrow differences, and past truces were broken. Extremists, including DAESH, have exploited the violence, gaining ground and carrying out deadly attacks against both sides.

The rebel-controlled Saba News Agency said 10 people were killed and 20 others were wounded in an air raid early on Tuesday on the village of Bani Haddad, in the Haradh area of northern Yemen. The warring sides have agreed to talks despite protracted differences, including over U.N. Security Council Resolution 2216, which calls for rebels to withdraw from key cities and surrender their weapons.

The government and its Gulf allies say the resolution is a prerequisite for peace. The Houthis, who have long complained of marginalisation, seized the government headquarters in Sanaa in September 2014, several months after advancing from their northern stronghold of Saada. They later encroached on the main southern city Aden, forcing Hadi into exile in Saudi Arabia. In November, Hadi returned to Aden and declared it his provisional capital. Under cover of coalition warplanes and backed by Arab soldiers and heavy weaponry, pro-government forces have recaptured five southern provinces, including Aden, since July.

A lull in fighting is sorely needed in the Arabian Peninsula's poorest nation, where nearly 6,000 people have been killed in the conflict, almost half of them civilians and more than 27,000 wounded since March, according to the U.N. The fighting has also pushed Yemen to the brink of famine. According to the U.N. World Food Programme (WFP), the number of food insecure people in Yemen is now close to 13 million. A shortage of drinking water is a critical issue. Also, UNICEF said in a report that nearly 10 million children, or 80 percent of the country's under-18 population, are in need of immediate humanitarian aid.
Last Update: Dec 15, 2015 3:41 pm
RELATED TOPICS