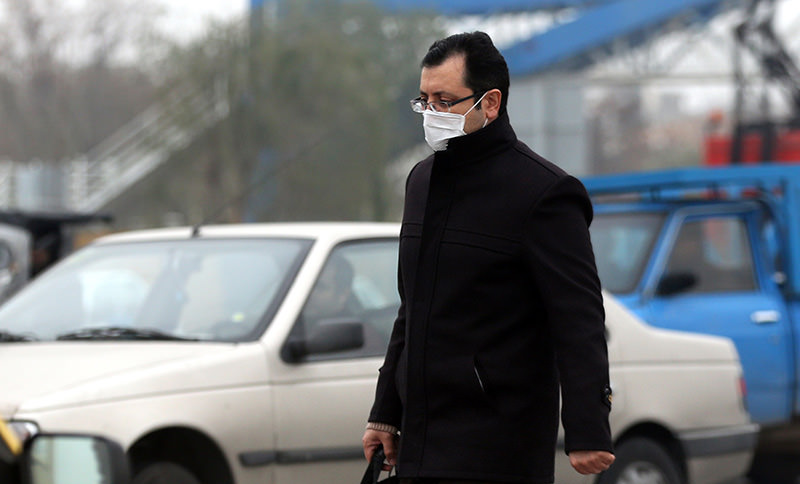 An Iranian man wears a facemask as he walks in a heavily polluted area in the west of the capital Tehran, on December 14, 2015. (AFP Photo)
by Dec 19, 2015 12:00 am
Iran is to close schools for two days in Tehran, an official said on Saturday, following air pollution three times the acceptable level that has blanketed the city in smog.

Air quality in Iran's capital was the worst for at least nine months this week, media said, and airborne particles from car emissions were at "seven times the standard level".

"All schools will be closed on Sunday in Tehran and in the… towns of Shahr-Rey and Islam-Shahr (both south of the capital)," said environment official Mohammad Hadi Heydarzadeh.

"If the pollution continues, schools will also be closed on Monday," he said on state television.

Traffic will be limited in the city centre and some factories will be closed, media reported.

Authorities have asked state employers to grant mothers time off to look after children who will be unable to go to school and urged the elderly, children and sick people to avoid going outdoors.

Emergency services have also been mobilized.

In December 2014, almost 400 people were hospitalized with heart and respiratory problems caused by heavy pollution in Tehran, with nearly 1,500 others requiring treatment.

The Air Quality Index on Monday showed an average reading of 162 — a "red status" warning that the air is unhealthy for everyone, according to World Health Organization standards.

On Saturday it had dropped slightly to 148, still well above the normal healthy level of between zero and 50.

Visibility was low Saturday as a grey fog blanketed the capital, a megacity of an estimated 14 million people, and authorities said they expect pollution to worsen in the coming days.

Exhaust fumes from five million cars and almost as many motorcycles that ply Tehran's roads each day make up 80 percent of its pollution, which increases in winter as emissions fail to rise above cold air.

"We cannot breathe. My eyes are itchy and my head hurts," said a taxi driver who only gave his first name, Khosro.

"Traffic is getting worse each day, it is stifling. It is like there is a grey haze hanging over the city. We can't seen the mountains," he said referring to the snow-capped Alborz range that overlooks Tehran.

In 2012, pollution contributed to the premature deaths of 4,500 people in Tehran and about 80,000 in the country, the health ministry said.

According to the office in charge of monitoring air quality, the air in Tehran was "pure for only 219 days" during the past 16 years.
Last Update: Dec 19, 2015 9:14 pm
RELATED TOPICS