Greek parliament votes and approves recognition of Palestine as a state 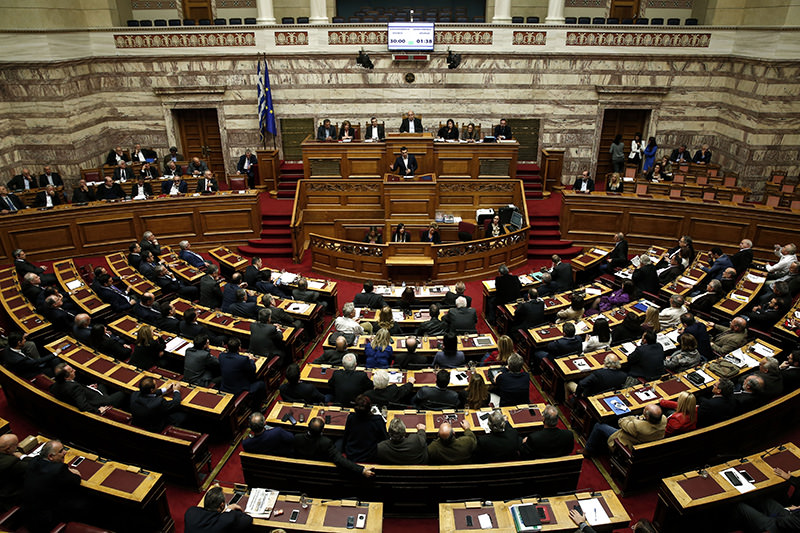 by Daily Sabah with AA Dec 22, 2015 12:00 am
Greek parliament has unanimously adopted a resolution urging its government to recognize the Palestinian state.

The historic resolution was adopted in the presence of Palestinian President Mahmoud Abbas and Greek Prime Minister Alexis Tsipras at the parliament Tuesday.

In his speech before the Greek parliament, Abbas said the Greek government's step towards recognizing the State of Palestine would be recorded in history. "Greek parliament's initiative further contributes to the foundation of the Palestinian state," he said.

He expressed the gratitude of the Palestinian people. "We are very proud that we are here at the bastion of the Greek democracy," he said. He also noted the recent visit of the Greek prime minister to Palestine and hoped to welcome the president of Greece and the Greek parliament's president in the near future.

In comments made before the decision, Abbas in a reception hosted by the president of the House, Nikos Voutsis, expressed his appreciation for the recognition.

"We feel that we are in our house, the house of Greek democracy, and we thank you very much and, God willing, further steps will follow for strengthening of the relations of the Greek and Palestinian people," he said.

The Palestinian president's speech is at the moment ongoing at the Greek parliament's Senate chamber.

In 2012, Palestine was recognized by the UN as a non-member observer state.

Two years later, an unprecedented international support for the symbolic recognition of a Palestinian state within the 1967 borders was voiced out.

This support was brought about by a series of motions adopted by a number of European parliaments. The Swedish parliament was the first to catalyze the momentum of recognition of the Palestinian state earlier.

In October 2014, Sweden officially recognized the State of Palestine, becoming the first European Union state to take such a move.

Currently eight EU members recognize Israel, with only Sweden recognizing the country following EU membership, while the rest, namely Czech Republic, Hungary, Poland, Bulgaria, Romania, Malta, and Greek Cypriot administration, doing so when they were former republics of the Soviet Union or part of the Eastern bloc.

While Sweden was the 135th state to recognize the state of Palestine, its 2014 move reverberated in many European capitals. Many national parliaments of the EU have approved recommendation decisions to recognize Palestine in recent years.

In October 2014, Britain's House of Commons adopted a non-binding resolution, urging the government to recognize the state of Palestine.

A month later, the Spanish Parliament voted with an overwhelming majority on a non-binding resolution, urging Madrid to recognize a Palestinian state within the 1967 borders.

France followed suit on Dec. 2, 2014, after a majority of French lawmakers approved a non-binding resolution, calling on Paris to recognize the Palestinian state.

On Dec. 11, 2014, the Irish parliament adopted a non-binding bill, urging the Irish government to recognize Palestine. A day later, the Portuguese parliament took a similar step.

In February 2015, the parliaments of Belgium and Italy adopted similar resolutions.

The overwhelming majority of countries in Africa, Asia and Latin America have also recognized the state of Palestine, making up most of the 135 countries who had taken the move.
Last Update: Dec 22, 2015 11:51 pm
RELATED TOPICS