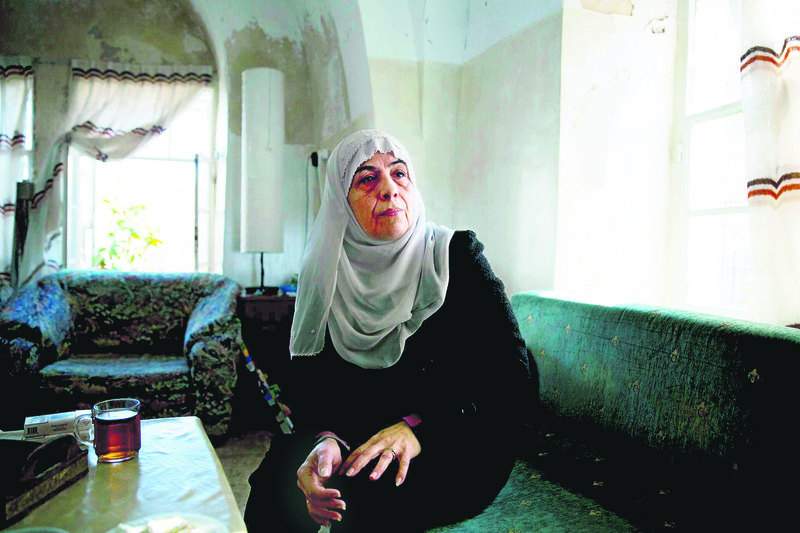 by Associated Press Dec 24, 2015 12:00 am
Ahmad Sub-Laban's family has lived for decades under threat of eviction from their home overlooking the gold-topped Dome of the Rock in Jerusalem's Old City. The experience inspired the 37-year-old Palestinian father of two to become a researcher for groups fighting attempts by Jewish settlers to move into properties in the city's central Arab areas. The Israeli Supreme Court is now poised to rule in the final legal battle over the apartment, and Sub-Laban has tapped into his network of contacts to try to halt the eviction by putting pressure on the Israeli government. "We built a campaign no one can ignore," said Sub-Laban. By talking about the case and inviting Western diplomats to his home in the historic Muslim Quarter, he also hopes to draw attention to the dozens of other Palestinian families at risk of being forced out of their homes in Jerusalem.

Under a long-standing U.S. framework for a peace deal, Jerusalem would be divided into two capitals, with Jewish neighborhoods going to Israel and the Arab ones to Palestine. This complex arrangement becomes yet more challenging as more Jews move into Arab areas. Earlier this month, Jerusalem-based U.S. diplomat Dorothy Shea visited the Sub-Labans to express concern about their fate and the "pattern of evictions." The U.S. Consulate later said that evictions of Palestinians are "counterproductive to the cause of peace." Washington is raising its concerns with Israel, the statement said. Israeli government spokesman Mark Regev did not address these concerns, characterizing the issue as simply a real estate dispute. "These sorts of property disputes are ultimately resolved in our courts, which are renowned for their independence, impartiality and professionalism," Regev said.

The friction over Israeli settlement in Jerusalem comes at a time when chances for a return to talks on a partition deal effectively on hold since Israeli Prime Minister Benjamin Netanyahu's came to power in 2009 are almost non-existent due to a lack of common ground between the key negotiators. A recent bout of deadly violence has deepened the hostilities. Since mid-September, 19 Israelis and an American student have been killed in Palestinian attacks, mostly stabbings, while nearly 120 Palestinians have been killed, 80 of them said by Israel to be attackers and the others in clashes with Israeli troops.

Unlike his two predecessors, Netanyahu says control of east Jerusalem, captured by Israel in 1967 and home to sensitive holy sites, is not up for negotiation. Palestinian President Mahmoud Abbas says there is no deal without a Palestinian capital in east Jerusalem. Settler activities in the crowded Arab neighborhoods of Jerusalem are part of a wider settlement campaign that has been widely criticized by Europe and the United States. Since 1967, Israel's government has built large neighborhoods for Jews in east Jerusalem, along with dozens of settlements in the West Bank. Nearly 600,000 Israelis live in the two war-won areas, which are claimed by Palestinians for a future state. The case of the 200-year-old, three-story building in which the Sub-Laban family lives stretches back decades and reflects Jerusalem's turbulent recent history. During British rule over historic Palestine, before the 1948 war over Israel's creation, the building was owned by a trust for Kollel Galicia, a group that collected funds in Eastern Europe for Jewish families in Jerusalem. During the 1948 war, Jordan took control of the West Bank and east Jerusalem. Jewish-owned properties in east Jerusalem came under Jordanian administration and were rented to Palestinian families including the Sub-Labans, who moved into the building in 1953. Ahmad was born in the apartment, as was his mother, Nura. After Israel's 1967 capture of east Jerusalem, such public properties were handed to an Israeli government department, the General Custodian. Palestinian residents were recognized as "protected tenants," provided they continued to live in the apartments and pay rent to the Custodian.

Sub-Laban said his family was forced out of the apartment between 1984 and 2001, but did not lose their protected tenancy during this period. Initially, the family moved out to begin renovations ordered by the city to fix some safety issues. But the renovations were then halted by the General Custodian as a violation of the lease, he said. Throughout this period, the family rented an apartment elsewhere in the city. In 1987, a Jewish family moved into the building and locked the Sub-Labans out by blocking the main entrance, he said. In 2001, a judge ordered a second entrance to be opened, enabling the family to return. Then, in 2010, the Custodian handed the building to the trust, which revived efforts to evict them. Last year, a magistrate court approved the eviction order, a decision upheld by a district court in October. The case is now before Israel's Supreme Court.

Jews can seek the return of property they owned before 1948 in east Jerusalem, but Palestinians are barred from reclaiming properties in now-Jewish west Jerusalem, said Ir Amim, a group advocating for a fair solution in Jerusalem. "Today, there are roughly 130 families in east Jerusalem in some stage of eviction proceedings," said the group, which employs Sub-Laban as a researcher. On Wednesday, it said an elderly man had been evicted from a store his family had rented since before 1967. Some 1,000 Jews have moved to Arab areas of the Old City since the 1980s. About 3,000 settlers live in Arab neighborhoods near the Old City. In some cases, like that of the Sub-Labans, they seek to reclaim buildings that were owned by Jews. In others, they buy properties, either directly from Palestinian families lured by large sums of money or through Palestinian middlemen who hide the identity of the buyers.
RELATED TOPICS