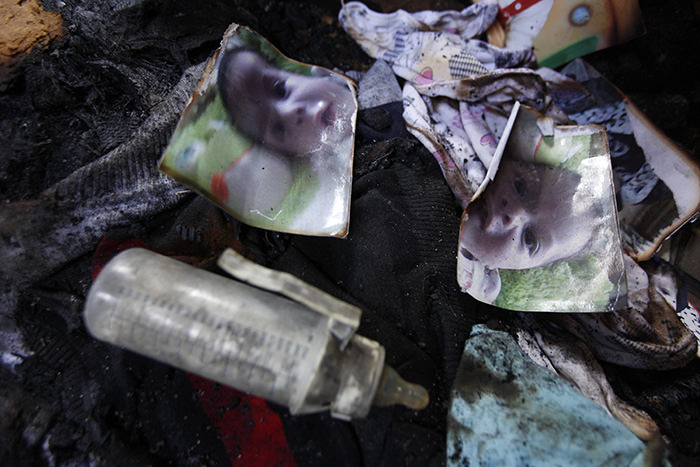 
Footage of Jewish extremist youth at a Jerusalem wedding dancing with guns and knives, stabbing a photo of Ali Dawabsheh, the baby who was killed during an arson attack on a Palestinian family's home in Duma, has emerged causing public outrage.

Aired on Israel's Channel 10 television late on Wednesday, the clip showed a wedding at which one dancing celebrant stabbed a picture of 18-month-old Ali Dawabsheh while others waved assault rifles, knives and what appeared to be a Molotov cocktail.

In the video one can see dozens of teens and young men singing a song in praise of revenge, while holding up guns and knives, Haaretz reported and added that Zionist Union leader Isaac Herzog wrote on Twitter: "You miserable people, you've forgotten what it is to be Jews. You disgrace your skullcap, your prayer shawl and the name of God. Whoever dances at a wedding and celebrates the murder of a sleeping baby is not Jewish and not Israeli. He should be put behind bars as quickly as possible."

The boy and his parents died when their home in the village of Duma in the occupied West Bank was set ablaze in July in an incident Israeli officials described as "Jewish terrorism".

The arson, and delays in solving the case, although Israel has several suspects in custody, contributed to the outbreak of the worst Palestinian street violence in years.
Last Update: Dec 24, 2015 12:21 pm
RELATED TOPICS