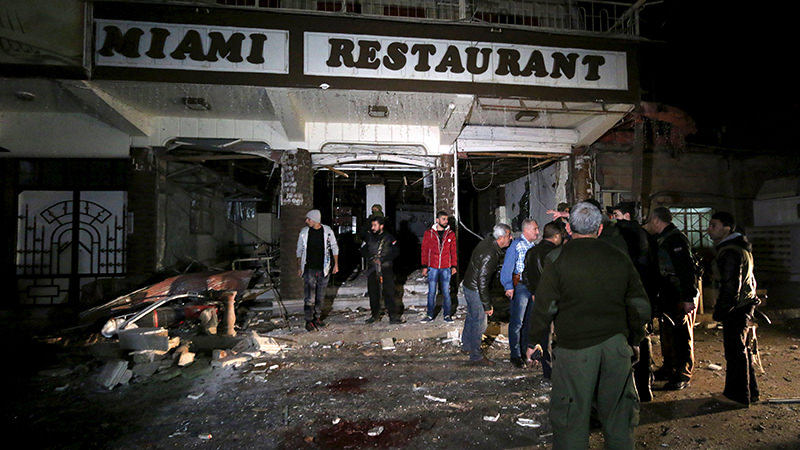 Residents inspect damage from a suicide bomb in Qamishli, Syria December 30, 2015. (Reuters Photo)
by Compiled from Wire Services
Dec 31, 2015 12:00 am
At least 17 people were killed and 30 wounded by explosions in three restaurants in the northeast of Syria on Wednesday, a monitoring group said, in attacks claimed by the Daesh terrorist group.

At least one of the blasts in the city of Qamishli was caused by a suicide bomber, the Britain-based Syrian Observatory for Human Rights said.

An AFP correspondent in the city said the suicide attack took place in a restaurant in a Christian neighborhood.

News agency Amaq, which supports Daesh terrorists, said the group had claimed responsibility for the attacks on the city, which lies near the border with Turkey and close to Iraq.

"Dozens of dead and wounded in the bombings by the fighters of Daesh in different parts of Qamishli city," it said.

Qamishli, is on the border with Turkey, and the area has repeatedly been targeted by Daesh terrorists, it was reported.

Syrian troops and seasoned Kurdish fighters have coordinated on security in Hasakeh province where Daesh terrorists have tried to advance.

According to the Observatory, all three of the restaurant explosions happened in a zone controlled by regime forces.
Last Update: Dec 31, 2015 10:46 am