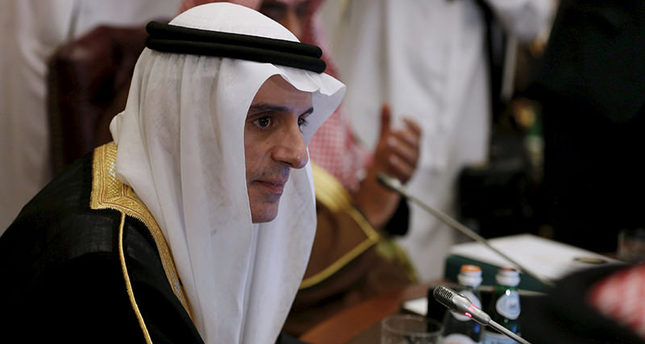 by Daily Sabah with Agencies Jan 03, 2016 12:00 am
Saudi Arabia widened its rift with Iran on Monday, saying it would end air traffic and trade links with the Islamic republic and demanding that Tehran must "act like a normal country" before it would restore severed diplomatic relations.

Insisting Riyadh would react to "Iranian aggression", Foreign Minister Adel al-Jubeir accused Tehran of despatching fighters to Arab countries and plotting attacks inside the kingdom and its Gulf neighbours.


Iranian pilgrims would still be welcome to visit Islam's holiest sites in Mecca and Medina in western Saudi Arabia, either for the annual haj or at other times of year on the umrah pilgrimage, he said.

The Saudi kingdom had announced late Sunday that it had cut diplomatic ties with Iran over the storming of the Saudi embassy in Tehran.

The move comes amid heightened tensions between the two countries after the execution of a prominent Shiite cleric, who was accused of aiming to overthrow the Saudi kingdom.

He also said that Riyadh would not allow Iran to undermine the kingdom's security.

Later on the same day, Saudi diplomats that were withdrawn from Iran after the embassy was stormed, arrived in Dubai on the way home, Al-Arabiya TV reported.

Kirby said the U.S. "will continue to urge leaders across the region to take affirmative steps to calm tensions."

On Monday, the U.S. called on Saudi Arabia and Iran to take steps to de-escalate tensions.

"We are urging all sides to show restraint and not inflame tensions in the region," White House spokesman Josh Earnest said.

A group stormed the Saudi Arabian embassy in Tehran and the country's consulate in the northeastern Iranian city of Mashhad, smashed windows and set fires to protest Saudi Arabia's execution of Shiite cleric Nimr al-Nimr.

The prominent Saudi Shiite cleric was among 47 people that the Saudi government said it had executed on Saturday after their convictions on terrorism-related charges.

Before his arrest in July of 2012, al-Nimr led mass protests against the Saudi authorities in the kingdom's eastern Qatif province.

The executions have sparked outrage in the region and raised fears of further stoking sectarian tensions, mostly enflamed by Iran.

Iran, one of the main backers of the Syrian dictator Bashar Al-Assad's regime, usually draws fire for allegedly supporting Shiite extremists in the country and in the region in general.
Last Update: Jan 04, 2016 9:58 pm
RELATED TOPICS