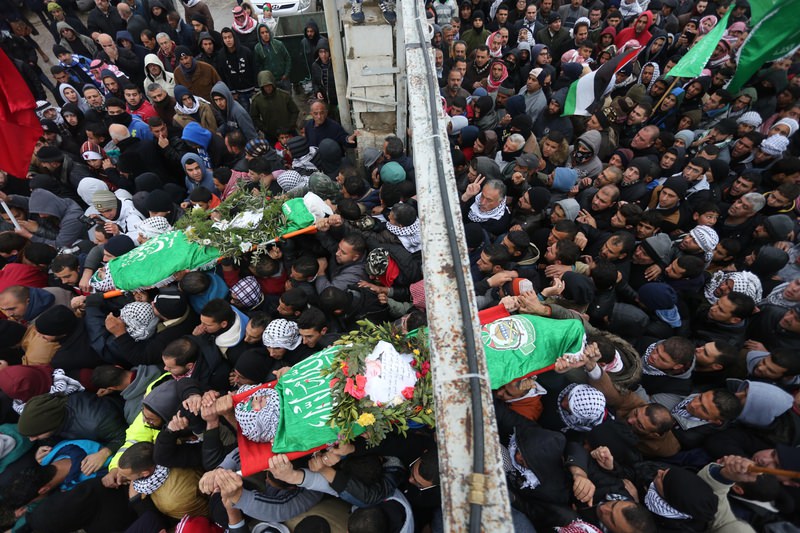 by Anadolu Agency Jan 03, 2016 12:00 am
Thousands of Palestinians attended a funeral on Sunday for two young men who were recently killed by Israeli security forces and whose bodies were temporarily held by the Israeli authorities.

Mourners marched from the Ramallah Medical Center to the town of Silwad northeast of Ramallah, from which the two slain men -- Anas Hammad, 21, and Mohamed Ayyad, 20 -- hailed.

On Friday, the Israeli authorities handed over the bodies of 23 slain Palestinians from the occupied West Bank to the Palestinian Health Ministry.

All 23 had been killed by Israeli security forces during an ongoing spate of violence that has claimed at least 144 Palestinian lives since Oct. 1.

On Saturday, in the West Bank city of Hebron, tens of thousands of Palestinians attended the funeral of 17 of the Palestinians whose bodies were returned.

Meanwhile, the bodies of 16 slain Palestinians -- all of whom hailed from occupied East Jerusalem -- are still being held by the Israeli authorities, according to the Palestinian Health Ministry.

The Israeli Information Center for Human Rights in the Occupied Territories (B'Tselem), for its part, criticized the Israeli government's policy of temporarily holding the bodies of Palestinians gunned down by security forces.

The measure, the rights group asserted, "does not punish the dead Palestinians, but rather their families".

The Israeli authorities, for their part, justify the policy as a form of "deterrence" against potential acts of violence against Israelis.