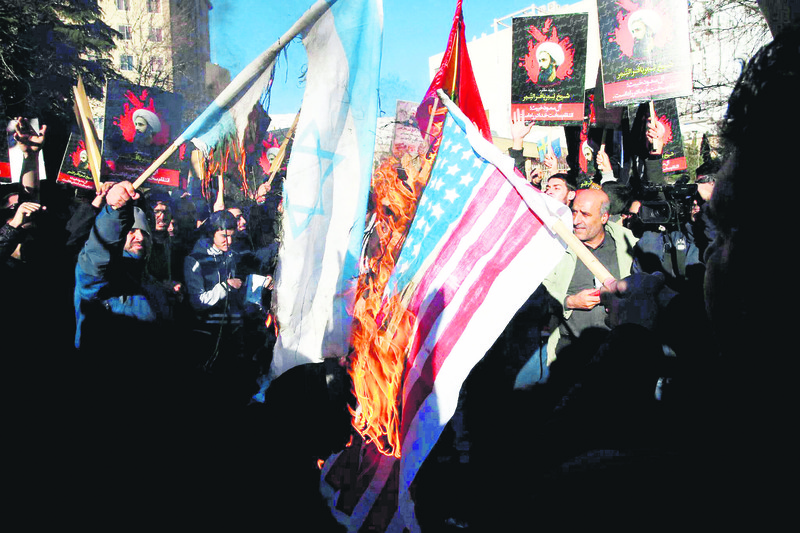 A group of Iranian protesters in Tehran torched Israeli and U.S. flags in order to show their anger at al-Nimr's execution. (AP Photo)
by Yusuf Selman İnanç Jan 05, 2016 12:00 am

Iran's sectarian policies toward Syria, Iraq and Yemen and expansionist policies has led to Tehran's isolation after the rift with Riyadh deepened over al-Nimr's execution, as countries urge Iran to stay calm and cut diplomatic ties

The execution of prominent Shiite figure Nimr al-Nimr along with two other Shiites by Saudi Arabia on Saturday has deepened the rift between Riyadh and Tehran over regional politics under the cloak of sectarianism as Iran accused Saudi Arabia of deliberately targeting members of Saudi Arabia's Shiite community, but missed the point that forty-four of the executed people were not Shiite. Iran is directly involved in the war in Syria, sending troops and military aid to the Syrian regime and mobilizing Shiite militias, especially Lebanon-based Hezbollah, to fight civilians and Western-backed opposition groups.

Tehran has also been interfering Iraq's domestic policies, considering Baghdad within its periphery. Several rights group criticized Iranian-backed Shiite militias for the arbitrary killing of Sunnis, looting and abduction. Iraq's residents in Sunni-dominated cities, some of which have fallen into the hands of DAESH, have repeatedly expressed the horror of the militias. Moreover, Iran's support for Houthis in Yemen has led to the overthrowing of the elected government, causing another dispute between Iran and Saudi Arabia. Tehran's sect-based expansionist policy has been a major reason for dragging the region into chaos. Iran's aggressive policies have been the main driver for the decision, a source told Reuters. "Saudi Arabia's position toward Iran is that 'enough is enough,'" a source familiar with the Saudi government's thinking said on Sunday. The source, who spoke on condition of anonymity, suggested the Saudi government was upset not merely with Iran but also with the United States for a perceived failure to respond to what Riyadh sees as Tehran's interference throughout the region," the news agency reported.

Iran, which has considered itself the leader of all Shiite Muslims across the world as a state policy since the revolution in 1979, has been isolated by other Muslim regional powers due to disputes over Iraq, Syria and Yemen. Iran has preferred to ally with Russia and China in Syria. The last move by Saudi Arabia revealed that Iran has no Muslim ally in the region as Bahrain and Sudan have cut their diplomatic relations with Tehran after the Saudi Embassy in Tehran was torched by protesters on Saturday night. The United Arab Emirates has also reduced its relations to charge d'affaires. Al-Azhar, the Cairo-based seat of Sunni Muslim learning, and the Organization of Islamic Cooperation in Saudi Arabia, condemned the attacks on Riyadh's missions and stressed Tehran's obligation to respect the internal affairs of the kingdom, according to Reuters.

Iran's ally Russia also has not made a statement expressing support for Tehran but an anonymous senior official told state-run news agency RIA Novosti that Russia was ready to act as a mediator. The U.S. urged the two countries to calm the tensions while EU foreign policy chief Federica Mogherini spoke to Iranian Foreign Minister Mohammad Javad Zarif by phone and urged Tehran to "defuse the tensions and protect the Saudi diplomats," according to AP. France and Germany also urged the two countries to calm the tensions. "We need to be vigilant about what is happening between Saudi Arabia and Iran. France calls on each side to reduce tensions," government spokesman Stephane Le Foll told reporters. German government spokesman Steffen Seibert also said that "We urge both countries to engage in dialogue. We call on both countries, Saudi Arabia and Iran, to use all possibilities to improve their bilateral relations."

The escalated tensions have impacts across the region as thousands of Shiites in Bahrain, Pakistan, Iraq and Europe have staged street protests against Saudi Arabia. Saudi protesters Qatif, the hometown of Al-Nimr, clashed with police, leaving at least one dead. In Baghdad, two Sunni mosques were rocked with blasts on Monday, killing two, including a muezzin, the person that recites azan to call people for prayer. Although Iraqi Prime Minister Heider al-Abadi claimed that the attacks were carried out by DAESH, a resident said that the attackers were wearing military uniforms.

In Yemen, which has become the latest victim of the proxy war between Riyadh and Tehran, heavy clashes erupted between Iranian-backed Houthis and government forces for Aden port's control. "Yemeni authorities announced a dusk-to-dawn curfew in Aden starting on Monday following a night of gun battles between armed men and government forces that killed at least 12 people from both sides, a local government spokesman said," Reuters reported.

The Middle East, which has been an area of sectarian conflict since the early years of Islam, yet remained relatively calm under the rule of the Ottoman Empire, has been dragged into a new sectarian wave as anachronistic disputes have been triggered by regional powers with the intention of expanding their influence. Iran and Saudi Arabia, which has a centralized Shiite version of Islam and the strict religious jurisprudence of Salafi-Wahhabi thought for its policies, respectively, have entered into a competition over the region by applying sectarian policies from which the people of the region suffer. Being far from the mainstream Islamic understanding that is in effect from Indonesia to Senegal, the two countries have been following expansionist policies. Iran has adopted the policy of leading and uniting the Shiite communities in different Arab countries, including Iraq and Yemen, following the revolution in 1979, whereas Saudi Arabia aims to expand Wahhabi Islam through aiding Wahhabi communities in several countries, as the strict version of Islam rejects the accuracy of any other Islamic interpretation.
Last Update: Jan 05, 2016 11:33 am
RELATED TOPICS