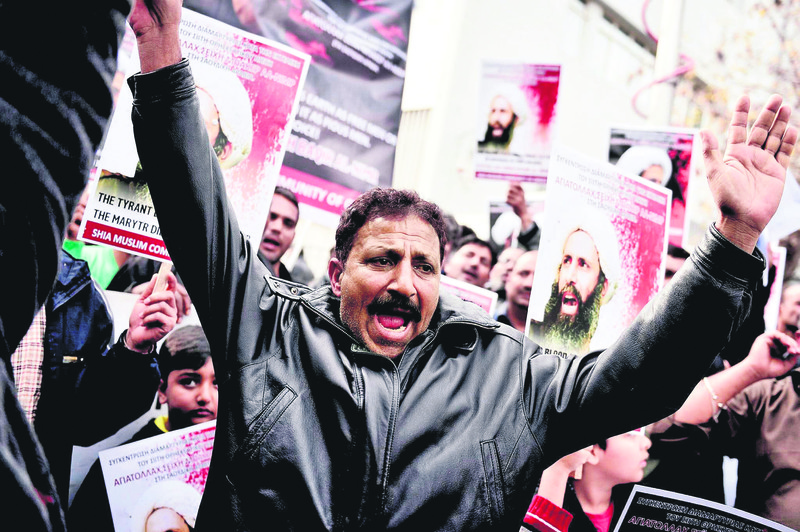 Members of Shiite community in Greece held a demonstration in front of Saudi Arabian embassy to denounce the execution of Shiite cleric Nimr al-Nimr by Saudi Arabia.
by Daily Sabah with Wires Jan 08, 2016 12:00 am

Amid the escalated tensions between Tehran and Riyadh after the execution of prominent Shiite figure Nimr al-Nimr by Saudi Arabia, Iran claimed Saudi-led coalition hit its embassy in Yemen. However AP reported there was no visible damage on the building

Iran Thursday accused the Saudi-led coalition battling Shiite rebels in Yemen of hitting its embassy there in an overnight airstrike, but the building bore no visible damage. Iran's state-run news agency said on Thursday afternoon that a Saudi-led airstrike last night hit its embassy in the Yemeni capital of Sanaa, citing the country's Foreign Ministry spokesman. However, an Associated Press reporter who reached the site just after the announcement saw no visible damage at the building. "Saudi Arabia is responsible for the damage to the embassy building and the injury to some of its staff," Foreign Ministry Spokesman Hossein Jaber Ansari was quoted as saying by Iranian state television news channel IRIB.

Residents and witnesses in the capital Sanaa said there was no damage to the embassy building in Hadda district. They said an air strike had hit a public square about 700 meters away from the embassy and that some stones and shrapnel had landed in the embassy's yard. The Saudi-led coalition fighting in Yemen will investigate the accusation, coalition spokesman Brigadier General Ahmed Asseri said. Coalition jets carried out heavy strikes in Sanaa on Wednesday night to target missile launchers used by the Houthi militia to fire at Saudi Arabia, he said, adding that the group has used civilian facilities including abandoned embassies. Asseri said the coalition had requested all countries to supply it with coordinates of the location of their diplomatic missions and that accusations made on the basis of information provided by the Houthis "have no credibility".

The diplomatic standoff between Iran and Saudi Arabia began on Saturday, when the kingdom executed al-Nimr and 46 others convicted of terror charges the largest mass execution it has carried out since 1980. Iranian protesters responded by attacking the Saudi Embassy in Tehran and its consulate in Mashhad. Late Sunday, Saudi Arabia announced it was severing relations with Iran because of the assaults. On Wednesday, Iranian diplomats in Saudi Arabia returned to Tehran, according to state media. Since Saudi Arabia severed ties to Iran, a host of its allies have cut or reduced their ties as well.

Meanwhile Thursday, Iran banned the import of goods from Saudi Arabia over the tensions, according to a report by Iranian state television. It said the decision came during an emergency meeting of the Cabinet of President Hassan Rouhani. Iran's annual exports to Saudi Arabia are worth about $130 million a year and are mainly steel, cement and agricultural products. Iran's annual imports from Saudi Arabia total about $60 million a year and consisted mostly of packing materials and textiles.

Meanwhile, since Saturday's execution of four Shiite Muslims in Saudi Arabia, hundreds or thousands of the minority sect have marched nightly in protest, and their anger could herald wider unrest. "People are angry. And they are surprised, because there were positive signals in the past months that the executions would not take place. People listen to his speeches and there's no direct proof he was being violent," a Qatif community leader said by phone. The protests in Qatif, an almost entirely Shiite district of about a million people in the oil-producing Eastern Province, have been mostly peaceful, though a fatal shooting and gun attacks on armored security vehicles have also taken place. Qatif is located near major oil facilities and many of its residents work for the state energy company, Saudi Aramco. Past incidents of unrest have not led to attacks on the oil industry, but a bus used by Aramco to transport employees was torched after a protest on Tuesday night.
RELATED TOPICS