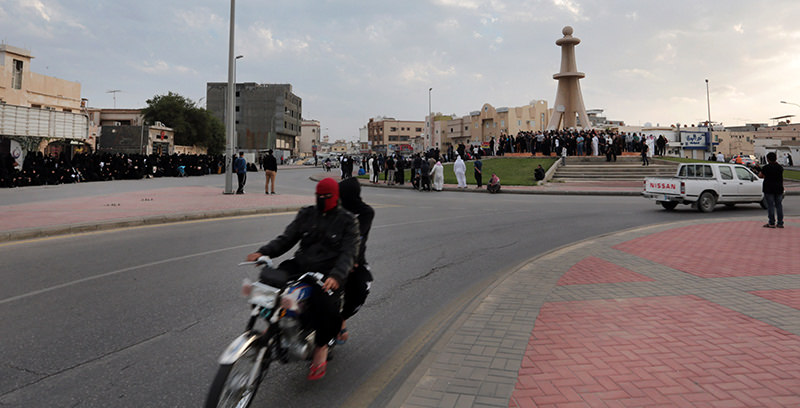 Saudi Shiite women (L) and men take part in a protest in the eastern coastal city of Qatif against the execution of prominent Shiite Muslim cleric Nimr al-Nimr (AFP Photo)
by Jan 11, 2016 12:00 am
Masked men threw firebombs at an intelligence service compound in the city of Qatif in eastern Saudi Arabia, activists said on Monday, in an apparent reprisal for the execution of a Shi'ite Muslim cleric earlier this month.

A Saudi Interior Ministry spokesman said "there was a failed terrorist attempt to burn the building with Molotov cocktails" and that one of the assailants was captured.

Video footage posted on social media and dated Jan. 9 showed several masked young men moving under cover of darkness and lobbing firebombs over the protective outer wall of a building compound. Most of the firebombs were seen exploding on the ground inside, setting a nearby tree on fire.

The authenticity of the footage could not immediately be confirmed.

It was not initially clear who was behind the attack. But the recording contained a footnote indicating that it was carried out by Shi'ite youth seeking to avenge the execution of Sheikh Nimr al-Nimr, a vocal critic of the kingdom's Sunni Muslim monarchy.

Nimr was among 47 prisoners put to death on Jan. 2, most of them convicted Sunni militants. A Saudi court convicted him in May 2014 of sedition, rioting, protesting and robbery in Qatif district, home to many of the kingdom's minority Shi'ites.

His arrest in July 2012, during which he was shot in the leg, prompted protests in which three people died.

Nimr's execution angered Shi'ites across the Middle East. After protesters stormed the Saudi embassy in Tehran and the Saudi consulate in Mashhad, the conservative Sunni kingdom cut diplomatic relations with Shi'ite Iran.

Shi'ite activists in eastern Saudi Arabia sought to distance themselves from the Qatif attack, saying it could discredit peaceful protests that had been taking place in the area since Nimr's execution.