In latest round of violence, 3 Palestinians killed by Israeli troops in occupied West Bank 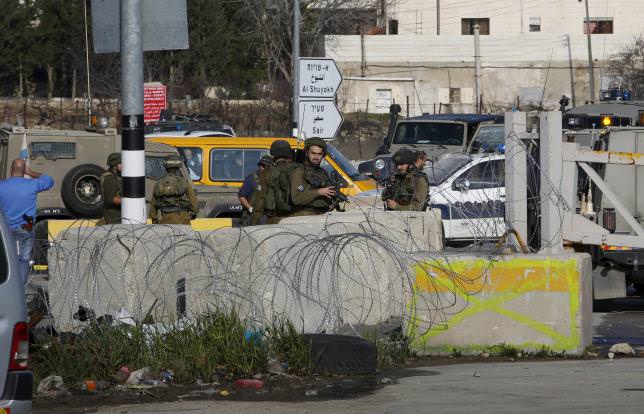 Israeli soldiers stand guard near the scene where Israeli military said a Palestinian was shot dead by Israeli troops, in the W. Bank Jan 12, 2016. (REUTERS Photo)
by Anadolu Agency Jan 12, 2016 12:00 am
Three Palestinians were killed by Israeli forces in the Israeli-occupied West Bank on Tuesday in separate incidents, according to the Palestinian Health Ministry.

In a statement, the ministry said that 21-year-old Sorour Ahmad Abu-Sorour had been killed by Israeli gunfire during clashes that erupted in the town of Beit Jala near Bethlehem in the southern West Bank.

"Abu-Sorour was killed after being struck in the chest by an Israeli sniper's bullet," the ministry said.

Later Tuesday, two Palestinians were killed by Israeli forces -- in two separate incidents --at a checkpoint near the West Bank city of Hebron (Al-Khalil).

According to the Health Ministry, Adnan al-Mashni, 17, succumbed to injuries sustained when he was shot by Israeli troops at the Beit Anoun checkpoint near Hebron.

One hour later, Mohamed Kawazbeh, 23, died at the same checkpoint after being shot multiple times by Israeli troops.

The Palestinian Red Crescent, for its part, said the Israeli army had prevented medics from providing assistance to the injured Palestinian, who was left to bleed to death.

According to the Health Ministry, Tuesday's deaths bring the total number of Palestinians killed by Israeli forces since Oct. 1 to 156, including 29 minors and seven women.

At least 116 of these were killed "in cold blood", the ministry says, while the bodies of 11 slain Palestinians are still being held by the Israeli authorities.
Last Update: Jan 12, 2016 8:24 pm
RELATED TOPICS