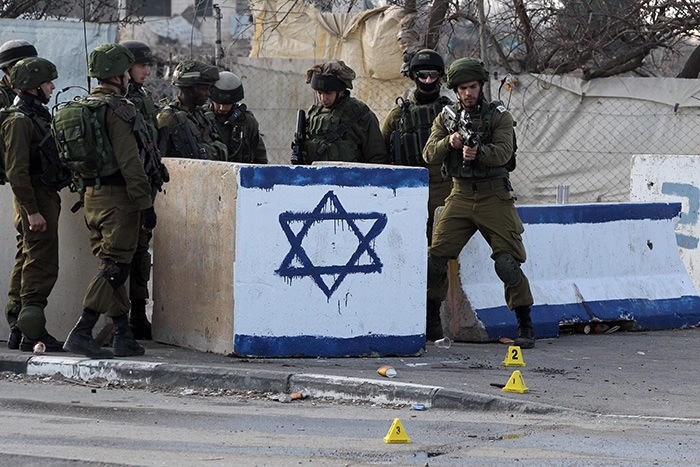 Israeli soldiers stand guard at the site of a stabbing attack at the Beit Hanoun junction near Hebron on January 12, 2016 (AFP Photo)
by Daily Sabah with Agencies Jan 14, 2016 12:00 am
Israeli forces shot dead a Palestinian civilian on Thursday after an alleged attempt to stab a soldier in the West Bank.

At least 178 Palestinians were killed and 16,200 others were injured by Israeli forces in 2015, according to official figures from the Palestinian Ministry of Health.

The ministry also said that a total of 143 Palestinians had been killed by Israeli soldiers and police in occupied East Jerusalem, the West Bank and the blockaded Gaza Strip during the current uprising (Intifada).

The United Nations Office for the Coordination of Humanitarian Affairs (OCHA), for its part, said that a total of 539 Palestinians' homes were demolished by Israeli authorities and 742 Palestinians were forced to leave their homes.

The Palestinian Prisoner's Society, meanwhile, said that Israeli forces had detained about 6,830 Palestinians in the West Bank and Jerusalem in 2015.

Among the detainees, 57 were women and 450 were minors, while 600 others were in "administrative detention", the OCHA added.

According to another report from the Palestinian Central Bureau of Statistics, 85 percent of Palestinian land in the West Bank and East Jerusalem is under Israeli control.

About 550,000 Israelis now live in more than 100 Jewish-only settlements built since Israel occupied the West Bank and East Jerusalem in 1967.

Israel has maintained a tight blockade on the Gaza Strip since 2007, when Palestinian resistance group Hamas took control of the territory; a move which has ravaged the strip's economy and shaved around 50 percent from its Gross Domestic Product.
Last Update: Jan 14, 2016 3:14 pm
RELATED TOPICS