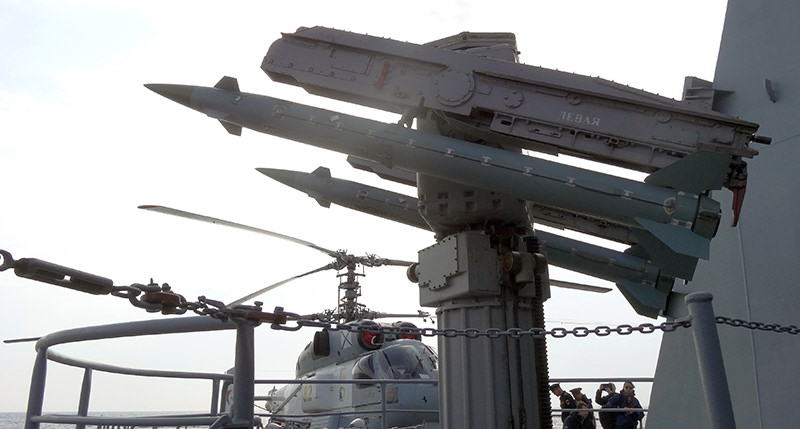 A picture shows an anti-aircraft defence missile system on the Moskva cruiser in the Mediterranean Sea, off the coast of Syria, on December 17, 2015 (AFP Photo)
by daily sabah Jan 15, 2016 12:00 am
Russia is secretly providing arms to the Lebanese Shiite militant group Hezbollah, which sides with the Assad regime in Syria, in return for assistance, according to recent reports quoting a senior Israeli Navy officer and Hezbollah commanders.

The Israeli navy officer has reportedly claimed that the Russian-made Yachont missiles end up in the hands of Hezbollah, and it is feared that the militant organization could launch those missiles.

Meanwhile, Hezbollah commanders have noted that Russia and their organization have become 'strategic allies' in the region and are becoming more interdependent.

They added that Russia has supplied them with anti-tank weapons, laser-guided rockets and long-range tactical missiles, in return for intelligence and operational assistance in Syria from the Hezbollah.

Hezbollah has sent thousands of its fighters to Syria to strengthen Assad's forces and currently holds the Syrian town of Madaya, where at least 40,000 people face starvation under the siege.

Hezbollah, also backed by Shiite-Iran poses a threat to Israel's security by launching missiles from Lebanon.

Israel carries out direct attacks on senior Hezbollah members and has killed Samir Kantar, who was convicted of carrying out one of the most notorious attacks in Israeli history.