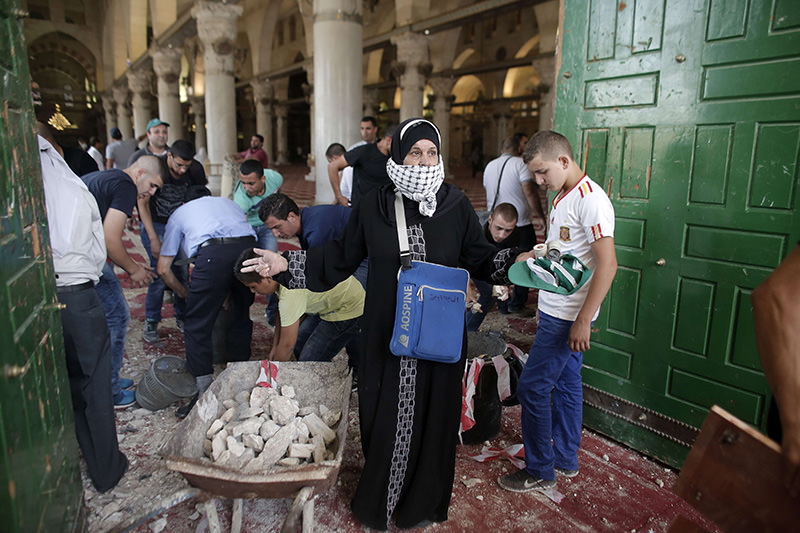 by Anadolu Agency Jan 18, 2016 12:00 am
Israeli violations against Jerusalem's Al-Aqsa Mosque have continued unabated since the city was occupied in 1967. According to Palestinian sources, however, the last two years have witnessed a noticeable uptick in both the number and scale of these violations.

The most serious assault on the mosque occurred in August of 1969, when Jewish-Australian Denis Michael Rohan set fire to the building, partially damaging it.

Until today, the Islamic Waqf in Jerusalem - which is linked to Jordan's Ministry of Awqaf (religious endowments) and is responsible for managing Jerusalem's Muslim sites - has continued to work on repairing the damage caused by that fire.

Attacks have not been limited to the mosque, but have also targeted worshipers. In April of 1982, an Israeli soldier indiscriminately opened fire on worshipers inside the mosque, killing two and wounding six.

And in October of 1990, Israeli police killed 21 Palestinians and injured another 150 after clashes erupted when Jewish extremists tried to place the foundation stone of a Jewish temple inside the mosque.

Since the Israeli occupation of Jerusalem in 1967, Israel has carried out "archaeological" work in the vicinity of the mosque without disclosing the exact nature or details of these excavations.

Palestinian objections to the excavations reached a fever pitch in September of 1996, when the Israeli government opened a tunnel under Al-Aqsa's western wall.

The move drew massive Palestinian opposition, sparking days of demonstrations in the Israeli-occupied territories, during which 63 Palestinians were killed and some 1,600 injured.

The Al-Aqsa Mosque was also central to the eruption of the second Palestinian Intifada ("uprising") in September of 2000, when controversial Israeli politician Ariel Sharon - accompanied by hoards of security forces - provocatively entered the Al-Aqsa courtyard.

The resultant uprising, which went on until 2005, saw hundreds of Palestinians killed and thousands injured throughout the occupied territories.

Following Sharon's fateful visit to the flashpoint site, the Islamic Waqf closed the mosque to non-Muslims until Israeli authorities reopened it from one side in August of 2003.

Since then, groups of extremist Jewish settlers have stormed the mosque compound with increasing frequency and in increasing numbers.

The provocative visits, say Palestinian sources, escalated dramatically in 2014 and 2015.

"There is no doubt that 2015 was the most difficult year - for the Al-Aqsa in particular and the Palestinian cause in general - due to the Israeli occupation's intransigence and the excesses of Israeli Prime Minister Benjamin Netanyahu's extremist right-wing government," Sheikh Ikrima Sabri, the mosque's head imam, told Anadolu Agency.

According to the Islamic Waqf in Jerusalem, over the course of last year, more than 11,472 Israeli settlers have forced their way into the Al-Aqsa compound.

Waqf spokesman Firas al-Dibs told Anadolu Agency that September of 2015 saw a record 1,575 settlers enter the mosque compound -- compared to less than a thousand settlers who had entered the site in previous months.

The uptick in settler intrusions that month coincided with the Jewish New Year holiday on Sept. 13, when extremist Jewish groups called on followers to converge on the mosque compound.

Palestinian Muslim worshipers, for their part, confronted the intruding settlers in many instances, prompting Israeli security forces to storm the compound with a view to protecting the settlers.

A number of Palestinians were injured in the subsequent melee, triggering yet another popular uprising in early October, which once again rocked the occupied territories.

That uprising, which some observers - including some Israeli officials - are calling a "third Palestinian intifada", continues to this day.

Netanyahu, meanwhile, has repeatedly said that the "status quo" at Al-Aqsa would remain unchanged - i.e., non-Muslims would remain barred from performing religious activity inside the mosque compound.

Palestinian observers, however, are skeptical, suspecting that Israel secretly plans to divide the mosque between Muslims and Jews -- a scenario that was openly discussed at an internal Israeli parliamentary session in August of 2014.

In the meantime, many Palestinian Muslim worshipers - known as "Murabiteen" - are maintaining a presence in the Al-Aqsa compound with the express purpose of confronting future incursions by Jewish settlers.
Last Update: Jan 18, 2016 6:43 pm
RELATED TOPICS