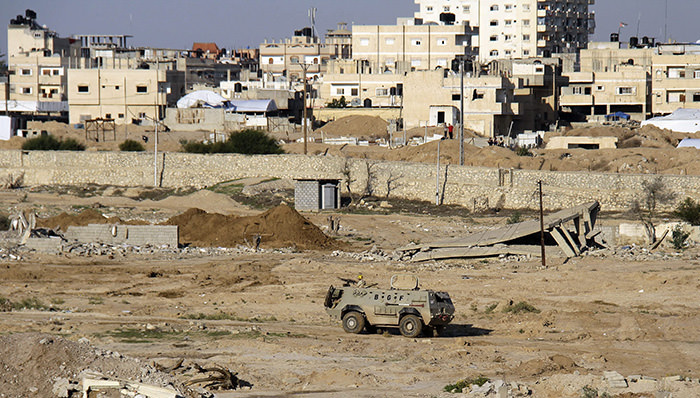 Egyptian army armored vehicle stands on the on the Egyptian side of border town of Rafah, north Sinai, Egypt. (AP Photo)
by German Press Agency - DPA Jan 21, 2016 12:00 am
Gunmen have killed five Egyptian policemen at a checkpoint in the Sinai Peninsula, the interior ministry said Thursday, in the latest attack claimed by the Daesh terrorist group.

The incident happened on Wednesday night in North Sinai province where security forces are battling a extremist insurgency.

"Unidentified gunmen opened fire on security forces at El-Etlawi square in the centre of El-Arish," the ministry said in a statement, referring to the provincial capital.

A gun battle ensued in which the five policemen were killed and three conscripts were wounded, it said.

Security forces were searching for the attackers, the ministry said.The region is a bastion of the Daesh-affiliated group Sinai Province, which claimed the attack in a statement posted on the terrorist websites.

"Three soldiers of the Daesh carried out a precise attack on a checkpoint of the infidel police at El-Etlawi square in El-Arish using light and medium weapons," the Sinai Province group said. Daesh fighters regularly target policemen and soldiers in the area.