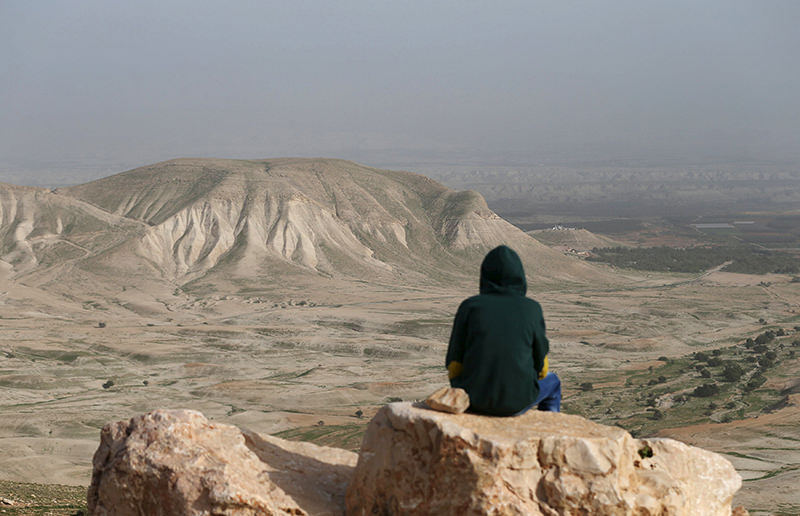 A Palestinian man sits on a rock at Jordan Valley near the West Bank city of Jericho January 21, 2016. (REUTERS Photo)
by Daily Sabah with Reuters
Jan 21, 2016 12:00 am
Israel confirmed on Thursday it was planning to appropriate a large tract of fertile land in the occupied West Bank, close to Jordan, a move likely to exacerbate tensions with Western allies and already drawing international condemnation.

In an email sent to Reuters, COGAT, a unit of Israel's Defence Ministry, said the political decision to seize the territory had been taken and "the lands are in the final stages of being declared state lands".

The appropriation, covers 154 hectares (380 acres) in the Jordan Valley close to Jericho, an area where Israel already has many settlement farms built on land Palestinians seek for a state. It is the largest land seizure since August 2014.

U.N. Secretary General Ban Ki-moon denounced the move and Palestinian officials said they would push for a resolution at the United Nations against Israel's settlement policies.

"Settlement activities are a violation of international law and run counter to the public pronouncements of the government of Israel supporting a two-state solution to the conflict," Ban said in a statement.

The land, in an area fully under Israeli civilian and military control and already used by Jewish settlers to farm dates, is situated near the northern tip of the Dead Sea.

"Israel is stealing land specially in the Jordan Valley under the pretext it wants to annex it," Hanan Ashrawi, a senior member of the Palestine Liberation Organization, told Reuters. "This should be a reason for a real and effective intervention by the international community to end such a flagrant and grave aggression which kills all chances of peace."

The United States, whose ambassador angered Israel this week with criticism of its West Bank policy, said it was strongly opposed to any moves that accelerate settlement expansion.

In a development likely to further upset Europe, Israeli forces demolished six structures in the West Bank funded by the EU's humanitarian arm. The structures were dwellings and latrines for Bedouins living in an area known as E1 - a particularly sensitive zone between Jerusalem and the Dead Sea.

Israel has not built settlements in E1, with construction considered a "red line" by the United States and the EU. It could potentially split the West Bank, cutting Palestinians off from East Jerusalem, which they seek for their capital.

"This is the third time they demolished my house and every time I rebuilt it, this time also I will rebuild it and I am not leaving here. If we leave they will turn the place into a closed military zone," said Saleem Jahaleen, whose home was razed.

Israeli officals did not respond to requests for comment on the demolitions. Prime Minister Benjamin Netanyahu said last week the EU was building illegally in the area.

"They're building without authorization, against the accepted rules, and there's a clear attempt to create political realities," he told the foreign media.

Netanyahu was scheduled to address the World Economic Forum in Davos on Thursday. He met U.S. Secretary of State John Kerry there but it was not clear if the issue was raised.

Palestinians, for their part, continue to demand the establishment of an independent state in the Gaza Strip and West Bank, with East Jerusalem-currently occupied by Israel-as its capital.

There are now about 550,000 Jewish settlers living in the West Bank and East Jerusalem combined, according to Israeli government and think-tank statistics. About 350,000 Palestinians live in East Jerusalem and 2.7 million in West Bank.

Israel is hoping that in any final agreement with the Palestinians it will be able to keep large settlement blocs including in the Jordan Valley, both for security and agricultural purposes. The Palestinians are adamantly opposed.

The last round of peace talks broke down in April 2014 and Israeli-Palestinian violence has surged in recent months.

Since the start of October, at least 148 Palestinians have been killed by Israeli forces.