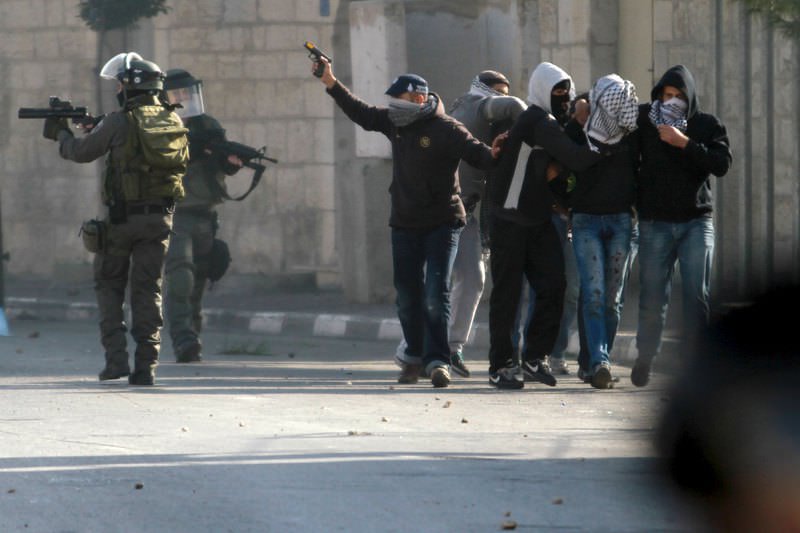 by Agencies Jan 23, 2016 12:00 am
Israeli police say a security guard shot and killed a 13-year-old Palestinian girl in an alleged stabbing attempt at the entrance to a West Bank settlement.

Police spokeswoman Luba Samri says an initial investigation suggests the girl fought with her family before leaving her home with a knife ahead of Saturday's altercation.

Ruqqayah Eid Abu Eid died on the scene, becoming one of at least 29 Palestinian children killed by Israeli forces or settlers in the last four months, according to Defence for Children International (DCI).

The exact reason for the current spate of violence -- which some observers are calling a third Palestinian "intifada" ("uprising") -- remain subject to debate, with Palestinians and Israelis accusing each other of starting the violence.

The tit-for-tat violence has been accompanied by a series of punitive measures by Israel that have further enraged Palestinians.

These measures include the demolition of the homes of alleged Palestinian attackers; the detention of Palestinian minors for throwing stones; and a refusal by the Israeli authorities to hand the bodies of slain Palestinians over to their families.

At the height of the violence, the Israeli authorities stepped up security in occupied East Jerusalem, with heavily-armed police and paramilitary troops deployed in the city and several Palestinian neighborhoods being entirely cordoned off.

Although the violence was initially confined to East Jerusalem, especially in and around the flashpoint Al-Aqsa Mosque compound, most of the Palestinian deaths since October have occurred in the occupied West Bank.

The deeply-divided West Bank city of Hebron has been particularly hard-hit by the violence.

Alleged attacks on Israelis have mainly been carried out by young Palestinians -- many of whom have used improvised weapons, such as kitchen knives or vehicles -- rather than organized resistance groups.

Some observers attribute the recent spate of violence, now in its third month, to a July arson attack in the West Bank by suspected Jewish settlers that left an 18-month-old Palestinian child -- Ahmed Dawabsheh -- and both of his parents dead.