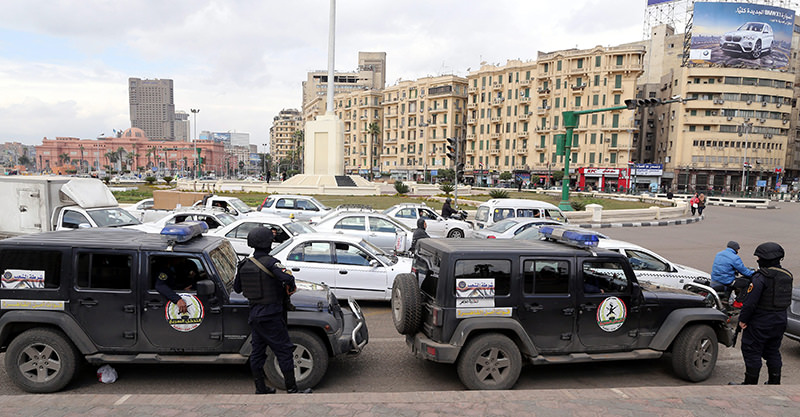 Member of the Egyptian security forces stand guard on Tahrir Square in Cairo, Egypt, 24 January 2016 (EPA Photo)
by Anadolu Agency Jan 24, 2016 12:00 am
Egyptian security forces are prepared for any contingency on the anniversary of the Jan. 25 uprising that unseated autocratic president Hosni Mubarak five years ago, Interior Minister Magdi Abdel-Ghaffar has said.

"The Interior Ministry has a plan to deal with all possible scenarios on Jan. 25," Abdel-Ghaffar said in a televized interview broadcast Saturday night.

The authorities are currently bracing for possible rallies and demonstrations called for by anti-regime activists to mark the passage of five years since the 18-day uprising that forced Mubarak to step down in early 2011.

In the run-up to the anniversary, the Interior Ministry has warned would-be demonstrators against approaching security facilities.

The Egyptian authorities, meanwhile, have tightened security and deployed additional forces across the country.

Abdel-Ghaffar insisted that the uprising's imminent anniversary "is not a cause for fear."

"However," he added, "a terrorist act could happen at any time; but this does not worry us, as we have plans to deal with all threats."

Rampant police brutality was seen as the driving force behind mass protests that erupted in January and February of 2011 and which eventually led to Mubarak's departure after 30 years in power.

Egypt has been dogged by political turmoil and violence ever since, while the security forces continue to battle a simmering insurgency in the restive Sinai Peninsula.