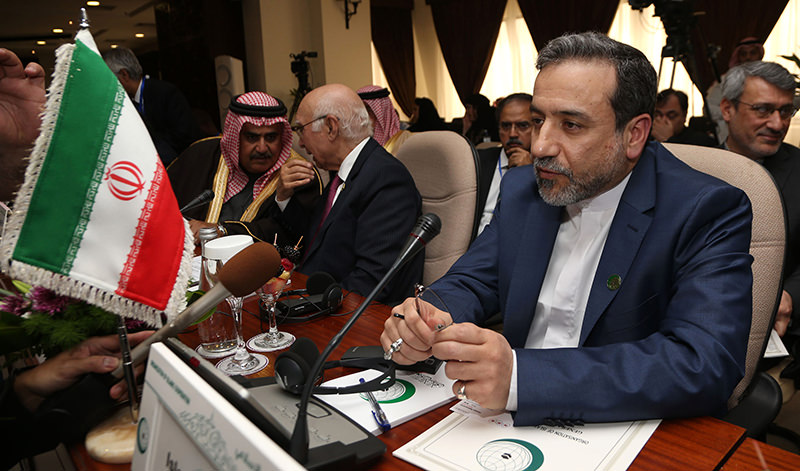 Iran's deputy Foreign Minister Abbas Araghchi (R) attends an emergency meeting of the Organisation of Islamic Cooperation (OIC) in the Saudi city of Jeddah on January 21, 2016 (AFP Photo)
by reuters
Jan 25, 2016 12:00 am
Iran and Saudi Arabia should take every step to de-escalate the tension between them, Iran's deputy foreign minister said on Monday.

Tensions between the regional rivals escalated this month after Riyadh's execution of a Shi'ite Muslim cleric triggered an attack by Iranian protesters on its Tehran embassy, leading the kingdom to cut diplomatic ties.

"We are prepared to consider any initiative which can help this region become more stable and of course safer, so we can combat the real challenge and the real threat in the region which is terrorism, extremism and of course sectarianism which is a big threat to all of us in the region," Abbas Aragchi told reporters at an aviation conference in Tehran.

Aragchi added that it was important to fight "extremist terrorist elements" who are a threat to the whole world.

Saudi Arabia, the main Sunni Muslim power, and Iran, the main Shi'ite one, accuse each other of fomenting instability across the Middle East.

Riyadh regards Iran's backing for Shi'ite militias in Iraq, Syria, Lebanon and Yemen as a part of Tehran's regional expansionism and a threat to its own security.

Saudi Foreign Minister Adel al-Jubeir has said in several interviews this month that full relations cannot be restored until Iran changes its behaviour and acts like a normal state rather than like "a revolution".