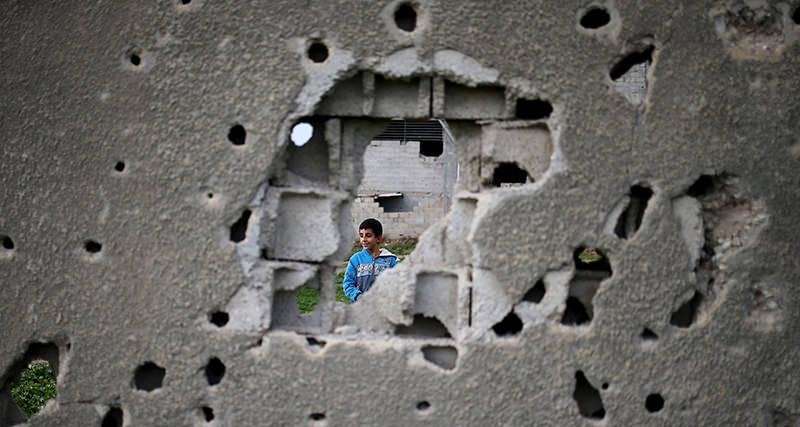 A Palestinian boy is seen through a bullet riddled wall from a building which was destroyed during the 50-day war between Israel and Hamas militants in the summer of 2014, in Gaza City, on January 14, 2016 (AFP Photo)
by Compiled from Wire Services Jan 25, 2016 12:00 am
The Israeli military said on Monday its aircraft struck a Hamas training camp in the Gaza Strip.

The military says that it hit a military training facility of the group that rules the Gaza Strip early on Monday. No injuries were reported.

Hours earlier, a rocket landed in Israel, causing no injuries.

The Israel-Gaza frontier has been largely quiet since Israel and Hamas fought a 50-day war in 2014 that killed more than 2,200 Palestinians and 73 people on the Israeli side. Still, rockets are launched occasionally from the territory and Israel typically responds with airstrikes.

Several Gazans have been killed in clashes with Israeli troops during the current outburst of Israeli-Palestinian violence, which has mainly centered on Jerusalem and the West Bank.
Last Update: Jan 25, 2016 10:16 am
RELATED TOPICS