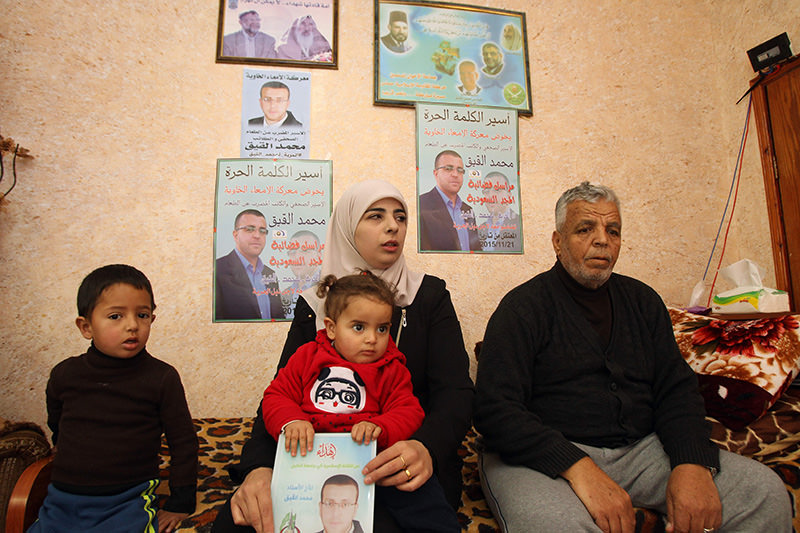 by Muna Asenwar Jan 25, 2016 12:00 am
The wife of an imprisoned Palestinian journalist, whose health in serious condition due to three months of captivity and a 62 day-long hunger strike, asked Turkish authorities to help with his release from Israel.

Fayha Shalash, wife of Mohammed al-Qiq, called on Turkey's President Recep Tayyip Erdoğan and Prime Minister Ahmet Davutoğlu to use possible diplomatic and political ways for the urgent release of her husband, who has been imprisoned since November 21.

Speaking to Daily Sabah, Shalash said that 33 year-old al-Qiq is on the brink of death.

"There is no time for more calls, it's time to act. Mohammed's lawyer visited him today, and told us that Mohammed could not talk to him. He has been on hunger strike for 62 days, he lost weight and his ability to talk. He cannot see or hear well. He never had such health issues before, but now the head of hospital says his situation is critical. We might lose him anytime," Shalash said. "Maybe he is having other problems too."

However they do not have any additional information as her husband refuses to talk with the doctors.

She also noted that they were not allowed to see or visit Mohammed, since he was detained three months ago, and the only way they receive information about him was through his lawyer Jawad Boulus, who also told AFP on Sunday that "he faces the possibility of death at any moment."

"I call Erdoğan and Davutoğlu, because we know they do not accept injustice, and they stand by the oppressed. My two little kids (16 months and 3.5 years old) deserve to smile once again, and have their father back with them. We trust in Erdoğan's humanity and I call out to him as a human being, not only as a political leader," Shalash said.

"We are running out of time, I want my calls to be heard and acted upon today, not tomorrow or the day after it. He is losing his life as the time passes," she added.

Al-Qiq, who works as a correspondent for Saudi Arabia's Almajd TV network, was detained on Nov. 21, 2015 by Israeli security forces at his home in Ramallah, West Bank, with the allegation of inciting violence against Israeli authorities and being a member of Hamas. Refusing the charges, Al-Qiq was detained for an unspecified period, using Israel's controversial detention legislation, "administrative detention" as a legal basis.

"He did not accept the accusation, of inciting violence through his reports. He is a journalist and he conveys truths about the Israeli violations and violence in the West Bank. They threatened him saying that if he does not accept the accusation; he would face administrative detention up to seven years without trial. That is why he had no choice but to go on hunger strike," Shalash stated.

According to Addameer, a Palestinian rights group, he started the hunger strike over torture and ill-treatment during his interrogation.

Al-Qiq has been kept in a hospital in the city of Afula (Al-Afoula) in northern Israel for over a month. His family has said they expect Israel to feed him intravenously if he loses consciousness, though Israeli authorities have denied they will force-feed him. A controversial Israeli law passed in July allows the force-feeding of prisoners in certain circumstances, though it has yet to be invoked.

Global human rights group Amnesty International demanded on Saturday that Israel either release or charges Al-Qiq, who the group said has been mistreated and tortured in ways that violate international law.

Media reports suggest that Al-Qiq spent one year in Israeli prisons without trial in 2003. Then he was detained again for 13 months in 2004. In 2008, he was arrested for 16 months over his activities with student bodies in Birzeit University of Ramallah.

"We also call the Turkish people and community, to stand in solidarity with us," Shalash said, adding that Turkish nation is a friendly nation towards Palestinians and she and her family feel at home when they visit Turkey.

The administrative detention policy has been condemned by human rights advocates abroad, and more recently by right-wing Israeli groups, which railed at the incarceration without charges of far-right activists.

Palestinian national Mohammed Allan ended a two-month hunger strike in August 2015 after his detention without charges was suspended.