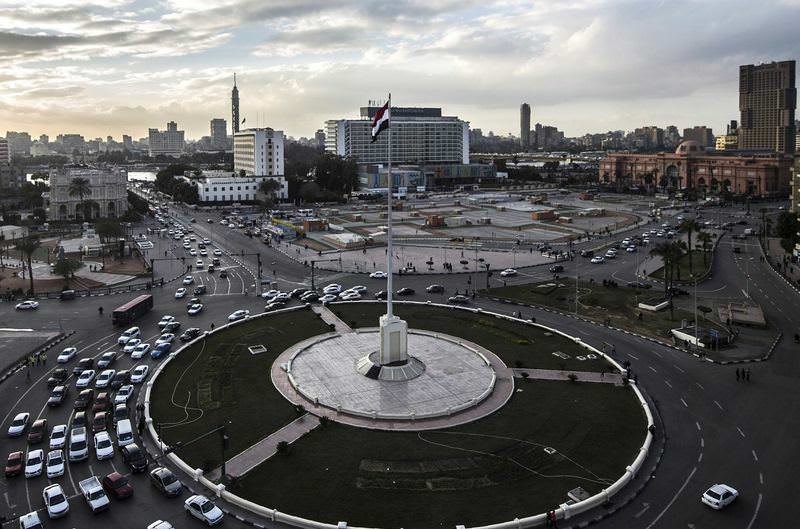 Tahrir Square, which was the center of the 2011 revolution, was empty on Monday as police prevented people from celebrating in the square.
by Daily Sabah with AA
Jan 26, 2016 12:00 am

Five years ago, Egyptians took to the streets for 18 straight days to call for an end to the 30-year rule of autocratic President Hosni Mubarak. At the time, protesters listed "bread, freedom and social justice" as their primary demands. But five years after Mubarak's departure, many Egyptians say none of the revolution's goals have materialized. "The revolution's goals remain a dream for Egyptians, who want a decent future for their children," former deputy Tharwat Nafae told Anadolu Agency. He asserted that the revolution's goals had yet to be achieved. "The [2011] revolution was merely a stepping-stone towards a better future," he said. Nafae argued that the anti-Mubarak uprising was a work in progress, which, "like all revolutions, must go through several stages." "The revolution is now trying to reconstitute itself after a coordinated scheme by the counter-revolution to undermine it," he said.

The dream of a democratic Egypt started after former Tunisian President Zine El Abidine ben Ali was deposed from his post after a popular uprising as millions of Egyptians also gathered in Tahrir Square in Cairo. People were determined to end the decades-long autocracy in one of the wealthiest but at the same time poorest and most corrupt countries in the region. Islamists, leftists, conservatives and almost every political faction were on the streets as well as ordinary people who were demanding a better future for themselves and their children. When Mubarak was ousted, Egyptians had one of the most joyful days in their history.

Members of the Muslim Brotherhood were also chanting slogans for a brighter future. The Muslim Brotherhood was the largest political movement in Egypt and was delivering aid, social services and education facilities across the country with a moderate Islamist ideology, seeking to end poverty, impoverishment, foreign intervention, unemployment, social problems and corruption. Since the first day of its establishment in 1928 by Hasan al-Benna, who was killed in 1949, the group never resorted to violence but preferred to remain in legal politics and separated itself from radical groups that adopted the Salafi/Wahhabi understanding of Islam like al-Qaida. The Muslim Brotherhood was familiar with politics as it was struggling to grab seats in parliament in the Mubarak era. The group entered parliamentary elections and presidential elections. It's popularity, reliability and fact-based rhetoric brought Muslim Brotherhood-supported Mohammad Morsi to power after receiving more than 50 percent of the votes. Morsi became the first democratically elected president of the country.

Egypt was on its way to becoming a democratic country where the president and members of the parliament were elected freely. However, Morsi's rule did not last long, and Gulf-supported Abdel Fattah el-Sissi, the incumbent president, changed the game and the fate of Egypt.

In a recent televised address, el-Sissi, former army chief who led Morsi's ouster only to assume the presidency himself one year later, said that Egypt's "June 30 Revolution" had "corrected the course" of the 2011 uprising. El-Sissi was referring to the mass protests on June 30, 2013 that paved the way for Morsi's removal, and subsequent imprisonment, by the army. "The June 30 Revolution came to correct and complete the Jan. 25 uprising," he said.

Despite el-Sissi's assertions, however, political activist Mohamed Abdel-Aziz believes the 2011 revolution has so far failed to produce a regime reflective of its goals. "Nothing has changed," Abdel-Aziz, a co-founder of the Tamarod movement, which spearheaded the protests that resulted in Morsi's ouster in 2013, told Anadolu Agency. "We are still being ruled by the same [mentality] and same bureaucracy," he said. Abdel-Aziz termed the ouster of two presidents in only four years, Mubarak and Morsi, as "the main successes of the January revolution." "At least Egyptians are now aware of their rights and are no longer silent," he said. Activist Ahmed Rami, for his part, believes that achieving the revolution's goals are Egypt's only way out of its current political malaise. "There can be no exit for Egypt from the current situation without completing the January revolution and achieving its objectives," Rami, a member of the now-dissolved Freedom and Justice Party, the political arm of the Muslim Brotherhood, said. He said the 2011 revolution had "broken the barrier of fear among Egyptians." "It also exposed the weakness of Egypt's military institutions, which had been ruling the country since 1952," he said.

Activist Esraa Abdel-Fattah who helped to ignite the 2011 revolution on the streets of Egypt and was nominated for a Nobel Peace Prize. Five years after the fall of autocrat Hosni Mubarak, she is shunned or insulted by Egyptians on those same streets. "They say I am a traitor and foreign agent and that we are the people who destroyed the country. I hear it when I am passing people in the streets," said Abdel-Fattah. "Some people still ask "what was wrong with Mubarak?". Abdel-Fattah and a small circle of fellow activists were once seen by many in Egypt as the best hope for an end to corruption and repression and the dawning of an era of free speech and respect for citizens by the state. Nowadays, she cuts a lonely figure in her small apartment, hoping Egyptians will rise up again to demand democracy despite the fiercest crackdown on dissent in the country's modern history. "I don't know if people will take to the streets tomorrow, or next year, or the following year," the 39-year-old journalist told Reuters at her home in the Sheikh Zayed suburb of Cairo. "The revolution is people demanding freedom, bread, justice, and dignity. People will keep demanding them."

Several activists, along with Morsi's Muslim Brotherhood, are calling for protests on Monday to mark the fifth anniversary of the uprising that ended the Mubarak regime. The Interior Ministry, for its part, which controls Egypt's sprawling security forces, has warned that it is ready to deal with any "unauthorized" demonstrations.

Morsi and many other prominent political figures that were also either members of the Muslim Brotherhood or related to it were arrested after the 2013 coup. Pro-Morsi and pro-democracy protesters did not leave the streets. They chanted slogans against el-Sissi and the coup. El-Sissi claimed that the protesters were threating national security while making a call to his supporters to go to Tahrir Square. El-Sissi finally gave the order to clear Rabaa Square and at least 817 demonstrators were killed by Egyptian security forces. Also thousands of people were arrested and tortured.