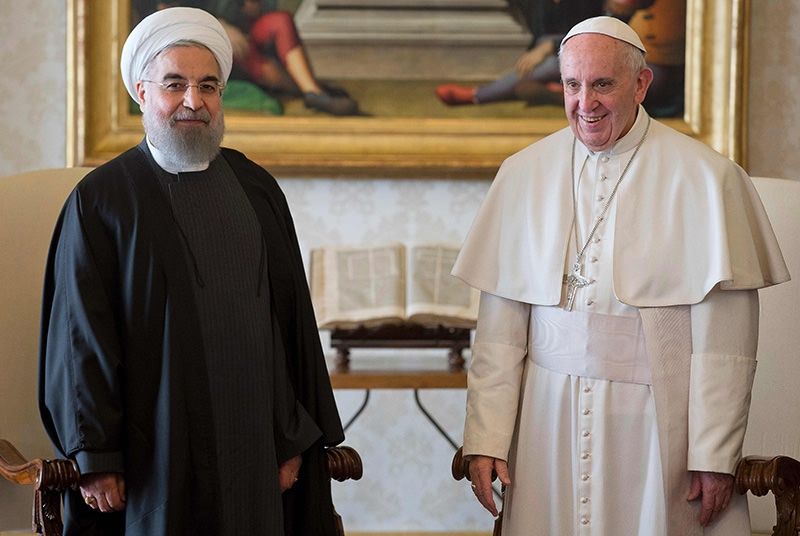 Pope Francis (R) and Iranian President Hassan Rouhani poses after their private audience on January 26, 2016, at the Vatican (AFP)
by Compiled from Wire Services Jan 26, 2016 12:00 am
Pope Francis on Tuesday met Iranian President Hassan Rouhani and asked Tehran to work with other Middle East states to promote peace and stop the spread of terrorism and arms trafficking in the region.

A Vatican statement issued after the meeting spoke of the "relevant role Iran is called on to play" to find political solutions to the problems afflicting the Middle East.

Shi'ite Muslim Iran is the strongest ally of Syria's Bashar Assad, while European countries back his mainly Sunni Muslim opponents in the five-year-old civil war.

Many Western nations accuse Iran of funding various militant groups that they deem to be terror organisations.

Rouhani and the pope spoke for 40 minutes in the pontiff's private study in the Vatican's Apostolic Palace and then the president held talks with top Vatican diplomats.

The Vatican said the discussions in both cases included "the important role that Iran is called on the play, along with other countries in the region, to promote adequate political solutions to the problems that afflict the Middle East, combating the spread of terrorism and arms trafficking".

The visit comes just days after international economic sanctions against Iran were dropped following a groundbreaking deal on the country's nuclear program.

In the wake of the opening of Iran's economy to the world, European governments and firms are keen to resume trade with the world's seventh-biggest oil producer.

Following Rouhani' historic visit to Europe, Rouhani on Monday tweeted that he expected to "reinforce bilateral relations and explore opportunities" during his visit, according to Italian news agency ANSA.

He spent the day in discussions with President Sergio Mattarella and Prime Minister Matteo Renzi.

The meeting with Renzi at the Capitoline Museum saw investment deals worth 17 billion euros ($18.45 billion) signed with Italian companies, including an agreement with Ferrovie dello Stato public railway, an oil and gas deal with Saipem and an arrangement for Iranian use of the port of Trieste.

Agreements are also expected in the minerals sector. Iranian Trade Minister Mehdi Karbasian, who is travelling with Rouhani, told Iranian news agency Tasnim on Monday that contracts worth $5.4 billion were ready for investment with Italy in the sector.

Iran's return to the global community, which Renzi welcomed as a "sign of extraordinary change", also paves the way to resolve regional issues, particularly the Syrian civil war, where Iran is a major supporter of Bashar Assad in the five-year conflict.

"The visit is key in winning the fight against terror," Renzi said. "This fight will be easier with Iran's presence."

"Everyone must do their part to the utmost, without ambiguities," he told Mattarella at a meeting at the presidential palace, ANSA reported.

He added: "As in Afghanistan, Iran and Italy should work together for peace in the Middle East."

Rouhani said his country could be a vital trade partner for Italy. "In Italy, we feel at home," he said. "We have historic ties to Italy, therefore we started the tour of Europe with Italy.
Last Update: Feb 24, 2016 6:52 pm
RELATED TOPICS