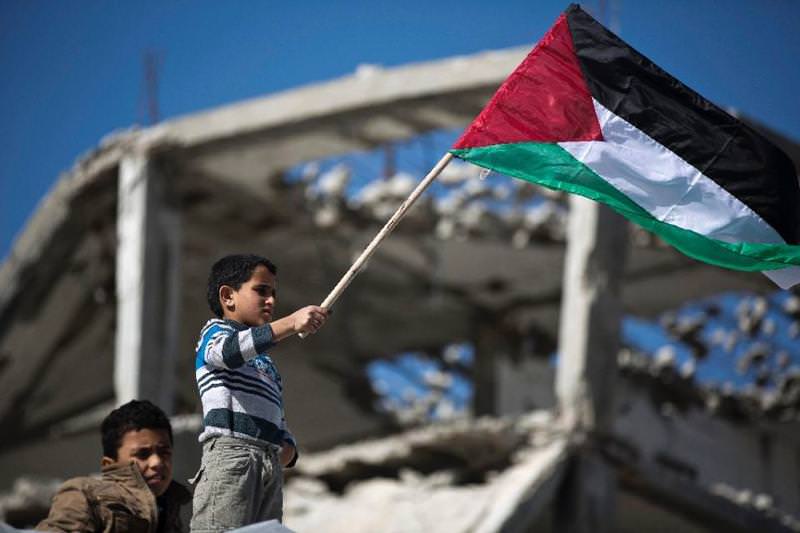 A boy waves Palestinian flag amid the rubbles of damaged buildings in West Bank.
by Daily Sabah with Wires Feb 01, 2016 12:00 am

As the pressure by the international community increases on Israel, Tel Aviv said they may consider starting peace talks again. However, the escalated tensions due to the daily attacks present the biggest obstacle

Israel would consider a French invitation to peace talks with the Palestinians, but believes France has made a mistake by saying it will recognize a Palestinian state if the talks fail, an Israeli government official said on Saturday. French Foreign Minister Laurent Fabius said that France will recognize a Palestine as a state if tis efforts to revive Israeli-Palestinian peace talks at an international conference fail. "If and when we get an invitation to a conference, we will examine it and respond to it," Fabius said in a statement. "If the conference he proposes hit a wall, "well ... in this case, we need to face our responsibilities by recognizing the Palestinian state," he added.

The Palestinian U.N. ambassador Riyad Mansour said that the Palestinian leadership do welcome the announcement of foreign minister Fabius today in Paris in connection with the convening of an international conference in the next few weeks, and if things fail the recognition of the state of Palestine by France. "I think the objective of this conference ... has to be to open the process that would lead to the end of the occupation and the preservation of the two-state solution," Mansour said. As for recognition, Mansour said, "France promised us some time ago that if there is no opening for a meaningful political process, a collective process that would lead to the end of occupation and independence of the state of Palestine and therefore saving the two-state solution soon, then they will recognize the state of Palestine."

The Israeli official dismissed the idea, saying: "Why would the Palestinians budge on even a comma in a conference if they already know that, without making progress, they will get what they want?" Palestinian President Mahmoud Abbas, speaking to African leaders at a summit in Ethiopia, urged them to back France's conference plan. But two Israeli cabinet ministers, both allies of Prime Minister Benjamin Netanyahu, said Israel should boycott such a meeting. "Unequivocally, Israel will not attend a conference under threat," Transportation Minister Yisrael Katz said.

A U.S. official responded cautiously to Fabius's statement. "The U.S. position on this issue has been clear. We continue to believe that the preferred path to resolve this conflict is for the parties to reach an agreement on final status issues directly," the official said. French Foreign Minister Laurent Fabius has previously called for an international support group comprising Arab states, the European Union and U.N. Security Council members to put pressure on the two sides to compromise. But Netanyahu has called France's initiatives "counterproductive".

Last week, Israel declared 370 acres in the West Bank south of Jericho to be state land. Today, some 380,000 Israelis live in 135 West Bank settlements, with another 200,000 in east Jerusalem. Israeli government led by Prime Minister Benjamin Netanyahu's Likud Party has come under heavy criticism for its approvals of settlements on illegally occupied Palestinian lands. Riyad Mansour called on the U.N. Security Council take action against increasing Israeli settlements. U.N. Secretary-General Ban Ki-moon has called Israel's expansion of Jewish settlements in occupied land "provocative" and said that it raises questions about its commitment to a two-state solution. More than 160 Palestinians have been shot dead by Israeli security forces during protests or alleged attacks since last October while 30 Israeli and foreigners killed. Israeli Prime Minister Benjamin Netanyahu has accused UN Secretary-General Ban Ki-moon of encouraging "terror" by suggesting that alleged knife attacks by Palestinian youth were a natural reaction to Israel's heavy-handed occupation. "The U.N. lost its neutrality and moral force a long time ago and the secretary-general's remarks do not improve the situation," Netanyahu said on Tuesday. "The Palestinian murderers do not want to build a state, they want to destroy a state," Netanyahu added.

Palestine has non-member observer status at the United Nations and its flag flies with those of member states at UN headquarters in New York. Of the 193 member states of the U.N., 136 have recognized the Palestine as a state. Their population is over 5.5 billion people, equaling 80 percent of the World population. Vatican is the one of the latest country that recognized the state of Palestine. Sweden became the first EU member nation to recognize the Palestinian state in 2014 and has been followed by several others. Israel occupied East Jerusalem and the West Bank during the 1967 Middle East War. It later annexed the holy city in 1980, claiming it as the capital of the self-proclaimed Jewish state – a move never recognized by the international community. Palestinians, for their part, continue to demand the establishment of an independent state on the Gaza Strip and the West Bank with East Jerusalem, currently occupied by Israel, as its capital.
RELATED TOPICS