At least 30 killed in clashes near Yemeni capital 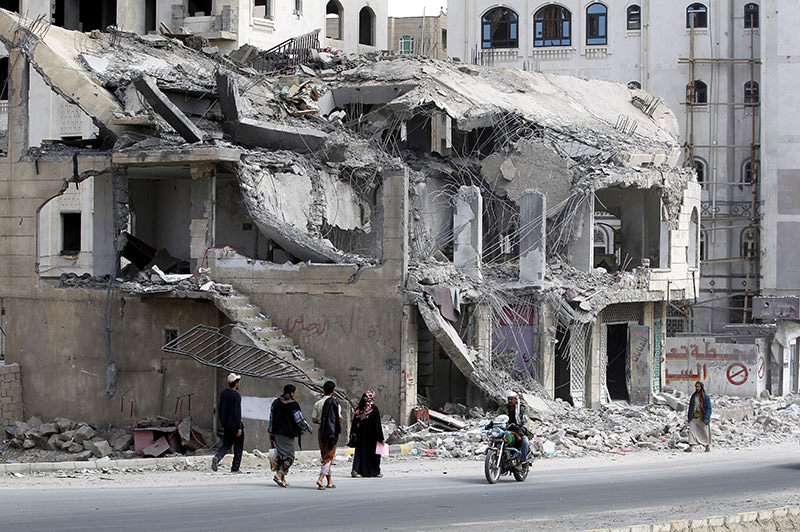 Yemenis walk past a building destroyed by a Saudi-led airstrike targeting a neighborhood, in Sana'a, Yemen, 01 February 2016 (EPA Photo)
by Associated Press Feb 02, 2016 12:00 am
Fighting has intensified outside the Yemeni capital, killing at least 30 people in two days, Yemeni security officials and tribal leaders said Tuesday.

Some 25 fighters from both sides were killed in clashes between government forces and Shiite rebels and their allies some 65 kilometers (40 miles) east of Sanaa, they said, adding that five civilians were also killed when artillery shells hit residential areas.

Yemen has been torn apart by conflict since 2014, when Shiite Houthi rebels allied with troops loyal to a former president and captured large swaths of the country, including the capital, Sanaa.

A Saudi-led coalition launched an air campaign against the rebels in March 2015. Since then, more than 5,800 people have been killed. More than 80 percent of Yemenis are in dire need of food, water and other aid, according to the United Nations.

In the southern port city of Aden, fighting erupted Tuesday night between government forces and al-Qaida fighters after authorities set up roadblocks as part of a security plan.

In Taiz, Yemen's third largest city, which is under a Houthi siege, artillery strikes killed three civilians and wounded 14 others as fighting broke out, the officials said. Airstrikes also hit around the capital, at one point setting a weapons depot ablaze for several hours.

The officials, who are neutral in the conflict, and tribal elders spoke on condition of anonymity because they were not authorized to brief reporters.
Last Update: Feb 03, 2016 12:00 pm
RELATED TOPICS