EU calls on Israel to halt demolition of Palestinian housing 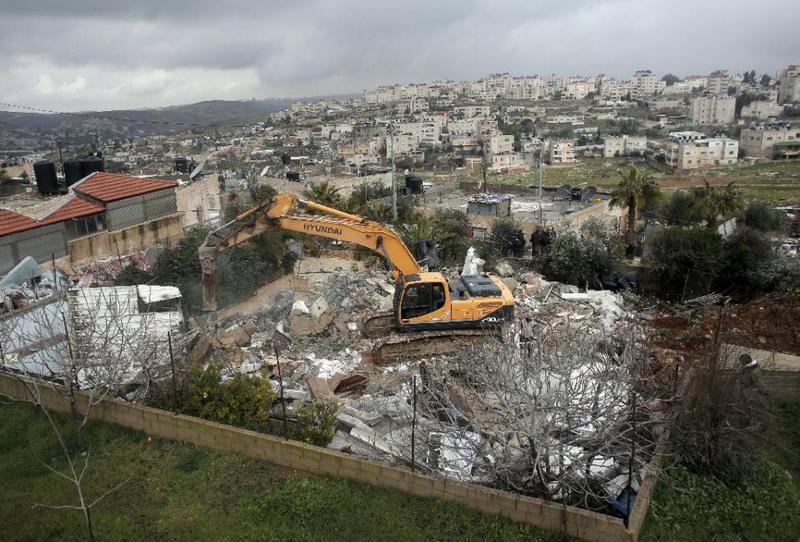 The European Union called on Israel to stop tearing down Palestinian homes, some of which were built with EU funding, as Israeli policies harm the peace process that has been deadlocked since a U.S. peace mission collapsed in April 2014

The European Union on Saturday called on Israel to halt the demolition of Palestinian housing. "In the past weeks there have been a number of developments in Area C of the West Bank, which risk undermining the viability of a future Palestinian state and driving the parties yet further apart," the EU diplomatic service said in a statement. "This is particularly concerning, both because of the extent of the demolitions and also the number of vulnerable individuals affected, including children who need support," the EU said, adding that, "demolitions included EU-funded structures. We call on the Israeli authorities to reverse the decisions taken and to halt further demolitions," it said. Foreign ministers from the 28 EU nations confirmed "the EU's firm opposition to Israel's settlement policy" and criticized the actions, including demolitions, confiscation and forced transfers. U.N. Secretary-General Ban Ki-moon said Friday he was "ashamed" at a lack of progress in the Israeli-Palestinian peace process, which has been deadlocked since a U.S. peace mission collapsed in April 2014.

The Israeli army lifted the blockade of a village in the northern West Bank on Saturday which Israeli officials claimed was home to Palestinian assailants who carried out a deadly attack in Jerusalem. Three men from Qabatiya, near Jenin, attacked police with guns and knives on Wednesday outside Jerusalem's Old City, killing a female officer and wounding another before being shot dead. They were found to be in possession of explosive devices, police said. "There's no doubt that the intention of a terrorist cell with such an arsenal of weapons was to carry out a mass attack," Israel police commissioner Roni Alsheich said on Wednesday. "Based on an assessment of the situation, it was decided to lift the blockade of Qabatiya," a military spokeswoman told AFP. The army also cut access to the northern West Bank town of 15,000 people and began a security sweep of the area. It arrested 10 people, relatives and acquaintances of the three young people believed to be 19 to 20 years old who killed the Israeli border policewoman. During the operation, the army also measured up the houses of the assailants for later demolition, a common practice after deadly attacks on Israelis.

In January, Israel declared 370 acres in the West Bank south of Jericho to be state land. Today, some 380,000 Israelis live in 135 West Bank settlements, with another 200,000 in east Jerusalem. U.N. Secretary-General Ban Ki-moon has called Israel's expansion of Jewish settlements in occupied land "provocative" and said that it raises questions about its commitment to a two-state solution. Israeli Prime Minister Benjamin Netanyahu criticized Ban's remarks on Israeli settlements. "The U.N. lost its neutrality and moral force a long time ago and the secretary-general's remarks do not improve the situation. The Palestinian murderers do not want to build a state, they want to destroy a state," Netanyahu said. More than 160 Palestinians have been shot dead by Israeli security forces during protests or alleged attacks since last October while 30 Israeli and foreigners killed. Israel occupied East Jerusalem and the West Bank during the 1967 Middle East War. It later annexed the holy city in 1980, claiming it as the capital of the self-proclaimed Jewish state, a move never recognized by the international community. Palestinians, for their part, continue to demand the establishment of an independent state on the Gaza Strip and the West Bank with East Jerusalem, currently occupied by Israel, as its capital.
RELATED TOPICS