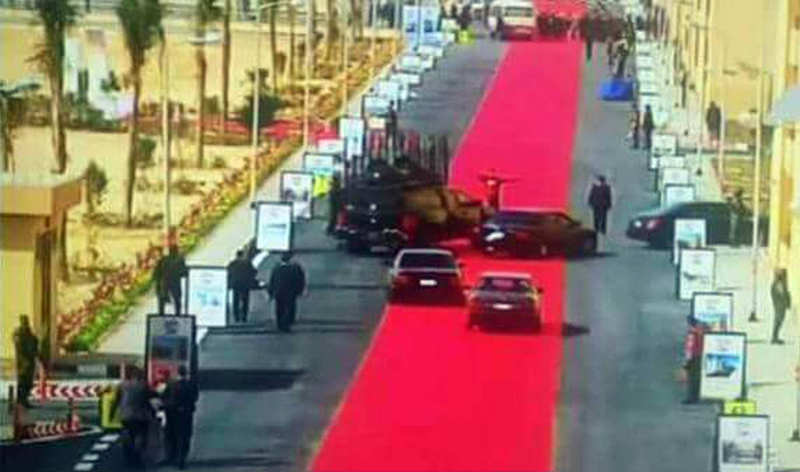 (Photo by Egypt State TV via AP)
by Daily Sabah with AA Feb 09, 2016 12:00 am
The red carpet rolled out on the road where the Egyptian President AbdelFettah al-Sissi's convoy passed through last Saturday sparked criticism from the opposition and public in the country where economic situation has been difficult, Anadolu Agency reported.

According to reports, the red carpet rolled out on the route where al-Sissi was passing through on his way to inauguration ceremonies in Giza city was four kilometers long.

The criticism came from the opposition as well as figures known for their closeness to al-Sissi.

Egyptian journalist, Yusuf al-Husaini, known to be pro-Sissi, said that the four kilometer long carpet was 'provocative' during a show on Egypt's ON TV.

Known for his support to Egyptian government, the political figure Memduh Hamza also said on his Twitter account, "Yes to rolling out red carpet for people. But rolling out a red carpet for a convoy was not done by King Farook or any other kings."

Arguing that the red carpet is worth nearly $200,000, Arab Human Rights Network Director Jamal Iyd said that it was not the right thing to do when a poor child is put on trial for stealing some bread.

The administration reportedly said that the carpets were older carpets previously used and that they were rolled out after being cleaned.
Last Update: Feb 09, 2016 5:35 pm
RELATED TOPICS