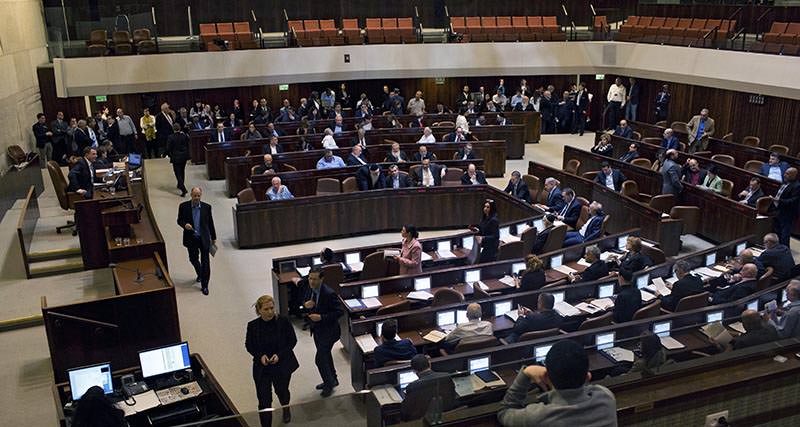 A general view during a voting session at the Israeli parliament Knesset in Jerusalem, Israel, 08 February 2016 (EPA Photo)
by Anadolu Agency Feb 11, 2016 12:00 am
An Israeli lawmaker from Prime Minister Benjamin Netanyahu's ruling party raised eyebrows in the Knesset on Wednesday when she questioned the legitimacy of the Palestinian identity because there is no 'P' sound in Arabic.

Israeli newspaper Haaretz reported that the Likud party's Anat Berko claimed that the Palestinian identity was borrowed from Roman phrasing, "so this loan-word also merits scrutiny."

In response, Arab lawmakers walked out of the session and the left-wing Meretz party's Tamar Zandberg asked Berko: "Are you an idiot?"

Berko's comment was based on the common English usage of the word Palestine, though in Arabic, Palestinians use the word "Falasteen" instead.

The debate had been called after the opposition Labor party had proposed a plan for separating from Palestinians even without an agreement for a two-state solution, which opposition leader Isaac Herzog said is unlikely under the current political conditions.
Last Update: Feb 11, 2016 3:14 pm
RELATED TOPICS