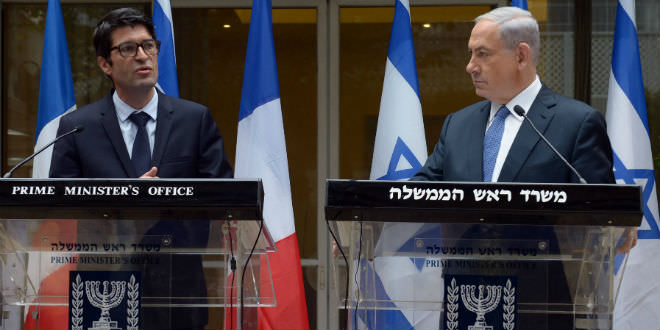 by Feb 16, 2016 12:00 am
France on Tuesday formally presented to Israel an initiative to revive Israeli-Palestinian peace talks, which broke down almost two years ago.

French Ambassador Patrick Maisonnave presented the initiative, which calls for an international conference to be held this summer, in a meeting with senior Israeli Foreign Ministry officials in Jerusalem.

But Palestinian Foreign Minister Riyad al-Maliki said that the Palestinians had given up on bilateral negotiations.

Nahshon would not say whether Israel accepted or rejected the idea of an international conference.

"Neither this nor that. The French ambassador presented the concept. We issued a statement. And that's it at this stage," said the Israeli official.

Israel "rejects any attempt to predetermine the outcome of negotiations," he said.

The principle of direct bilateral negotiations was being supported by the international community and also had served as the basis for the 1979 peace agreement with Egypt and the 1994 peace treaty with Jordan.

In January, the then foreign minister Laurent Fabius said France was trying to convene an international peace summit on the issue. He issued an ultimatum that - if the talks failed - France would formally recognize a Palestinian state.

France has also presented its initiative to the Palestinians and ambassadors would also update other world leaders.

The Palestinian foreign minister said there would be no return to negotiations with Israel in the form used up until now, which had been proven "futile."

Only Israel had benefited from bilateral negotiations, allowing it to expand its settlements, he told Voice of Palestine Radio.

"At the moment we believe that the French proposal is a better alternative than direct negotiations," said al-Maliki, noting talks should be "more or less" similar to the 5+1 negotiations with Iran on the nuclear issue.

If the efforts to revive talks failed, the Palestinians would resume their effort to produce a Security Council resolution against settlements, he said.

Palestinian President Mahmoud Abbas was likely to discuss the strategies with US Secretary of State John Kerry in a parley in the region, possibly in Amman, on February 21, he said.

The last attempt at Israeli-Palestinian talks - supervised by Kerry - collapsed in April 2014.

Since October, Israel and the Palestinian areas have witnessed a new wave of street violence, the deadliest in years.
Last Update: Feb 16, 2016 5:57 pm
RELATED TOPICS