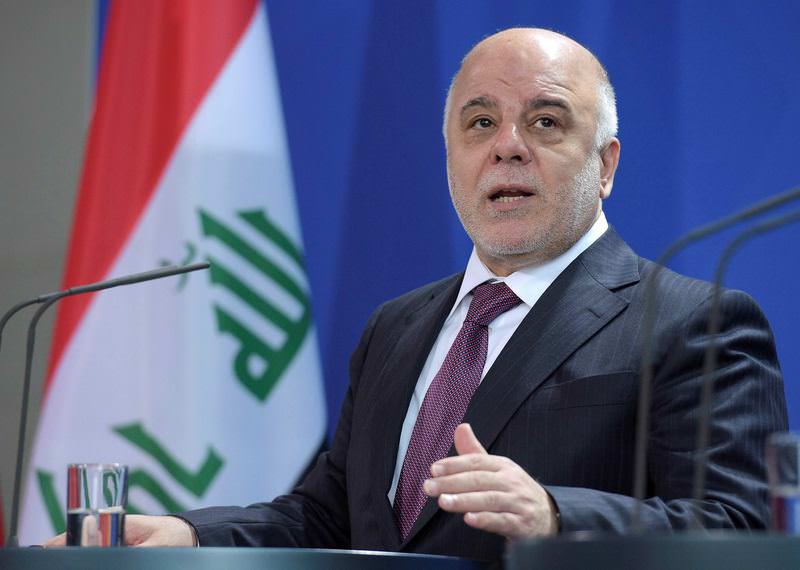 Iraqi PM al-Abadi promised to end corruption, clear Iraq of DAESH and preserve the country's territorial integrity before becoming prime minister. Now, he could be forced to leave his post, since Shiite clerics oppose corruption reforms, military operations against DAESH are slow and Kurds favor independence

Former Iraqi Prime Minister Nouri al-Maliki had intended to continue in a third term before current Prime Minister Haider al-Abadi was elected to the post by Iraqi parliament. Maliki was largely accused of pursuing sectarian policies, making Tehran the de facto ruler of Iraq, corruption and waging an insufficient fight against DAESH. Maliki, who was supported by Shiite clerics, was dismissed, and Abadi was a new hope for Iraq. Since his first day as Prime Minister, Abadi stressed the three points of fighting corruption, driving DAESH out and defending Iraq's territorial integrity. He has put several reforms in practice to counter corruption, allied with the United States against DAESH and re-took almost half of DAESH-controlled territory and opposed the disintegration of the Kurdish Regional Government (KRG). Despite his partial success in the ongoing crisis, which has turned sectarian since Iran and Saudi Arabia began waging proxy wars in Syria and Yemen, sectarianism in Iraq, the KRG's plans for independence and rising dissident voices from Shiite clerics could end Abadi's term, although he still has 30 months to serve.

"Iraq's political blocs will likely resist Prime Minister Haider al-Abadi's attempts to replace politically appointed ministers with technocrats, a possible last-ditch effort to reform the government that could end up costing the premier his position," Reuters reported last week. Abadi revealed few details of the reshuffle, but asked parliament to support him. Any move within the cabinet could change the sensitive balances in parliament, which includes Sunnis, Shiites, Kurds and several other ethnic and religious minorities, and a disapproved move in a fragile atmosphere could make Abadi a target of different groups. Sami Askari, a senior lawmaker from Abadi's State of Law coalition, was quoted by Reuters as saying: "He is at the mercy of the blocs now. Unless they agree, he can't do anything. The most Abadi could hope for was cosmetic changes by replacing a few ministers with candidates from the same blocs, which would only add to his growing weakness." Sunni lawmaker Hamid al-Mutlaq told Reuters he was skeptical of Abadi's intentions but saw no other option. "If Abadi fails to win the blocs' full support this time around, the mismanagement of the state would push Iraq into the abyss," he said.

While Sunni Iraqis complain about the government's sectarian policies and are already skeptical of the Shiite prime minister, Grand Ayatollah Ali al-Sistani also constrains Abadi from doing more to fight corruption. "Emboldened last summer by popular protests and a call for action by Ali al-Sistani, Abadi launched reforms in August aimed at dismantling a system of quotas and patronage that was put in place after the 2003 U.S.-led invasion that toppled Saddam Hussein. His biggest challenges are reforming Iraq's corrupt military, which largely collapsed in the face of DAESH advances in 2014, and streamlining a government seen as inept amid an economic crisis triggered by low oil prices," Reuters said. The patience of the Shiite cleric might be drying up as two weeks ago he suspended weekly sermons about political affairs in apparent frustration with Abadi. "In the early weeks when the Marjaiya (religious leadership) and the public wanted this, he could have put the blocs in the corner. No one dared to say no to reform. But now they are willing to say no because the Marjaiya is fed up," Askari told Reuters.

Another powerful Shiite cleric, Moqtada al-Sadr, contrarily called on Abadi to carry out the reforms immediately and establish a government of technocrats. He said on Saturday the country needed a technocratic government, threatening to quit politics if Abadi failed to carry out the promised reforms. "The remarks by Sadr, whose al-Ahrar bloc holds 34 seats in parliament and three cabinet posts, were the first high-level reaction to the premier's call for politically appointed ministers to be replaced with technocrats," Reuters said. Sadr called for "forming a technocratic government away from partisanship that should include all." He added that withdrawing from politics would become "a duty" if the government did not make swift progress to implement reforms such as purging the judiciary and curbing corruption. "There is no room for slacking off," he said in a televised address. "Let it be known that the non-implementation of these items is a betrayal of Iraq and its people," he added. Sadr's messages are delivered to millions of his followers, some of whom fight against DAESH along with the Iraqi forces.

KRG President Masoud Barzani in early February said that the "time has come" for holding a referendum on statehood. "That referendum does not mean proclaiming statehood, but rather to know the will and opinion of the Kurdish people about independence, and for the Kurdish political leadership to execute the will of the people at the appropriate time and conditions," he said. Baghdad, however, strictly opposes the idea and claims that the result of the referendum will be invalid. "I urge them not to go ahead with the referendum," Abadi said at a news conference in Berlin on Thursday. "If they say they are not going to abide by its outcome, then why hold a referendum? … I urge Kurdish leaders to reconcile their people to this fact that the Kurdistan region will not progress without Iraq," Abadi said. Although the oil-rich region is coping with an economic crisis, Barzani seems to be determinant and does not want to share the burden of Baghdad-controlled Iraq. "The KRG announced earlier this month that state employees would be paid only part of their salaries and that months of unpaid wages from last year would be considered loans to the government until further notice," Agence France Presse (AFP) reported. "Iraqi oil revenues have fallen to just 15 percent of the revenues we had two years ago. This is a major decline and we therefore have great difficulties," Abadi said, and added that in return for paying KRG state employees' salaries he asked the Kurdish government to hand over control of its oil to Baghdad. There was no immediate response to the proposal. The territorial dispute with the KRG, the decline of oil prices and the KRG peshmerga fight against DAESH poses a problem for Abadi.

The biggest challenge for Iraq and Abadi comes from DAESH, which controls large swathes of Iraq. Having re-captured Tikrit last year, the government last week declared that Ramadi was fully re-captured by government and Shiite forces. However, it remains a question as to how the city will be rebuilt due to the financial troubles. Although Abadi vows to re-capture Mosul and clear all of Iraq of DAESH, the U.S. says retaking Mosul this year may not be possible since the city is home to millions of people and poses geographical problems for a fight. Fallujah is also in DAESH hands and there is no known military plan for retaking the city as of now. Moreover, the re-capture of the cities brings new problems, since Iran-backed Shiite militias are accused of killing and kidnapping Sunni residents and looting their properties. The increasing rift between the members of the two sects forces Sunnis to make a choice between DAESH oppression and Shiite militias' extrajudicial killings. In an interview with Deutsche Welle on Monday, in response to the question of what the government would do with the sectarian conflict and the arbitrary acts of the Shiite militias, Abadi avoided giving an answer and said: "Iraq is fighting a war against terrorism. We are trying our best to fight them. We are trying our best to fight outlaws in our country. It's not black and white. I cannot turn the country upside down in one day. There are a lot of problems in this country, and lots of countries intervening in my country. There has been a lot of support to terrorism, to militias in my country. We are trying to fix it."
RELATED TOPICS