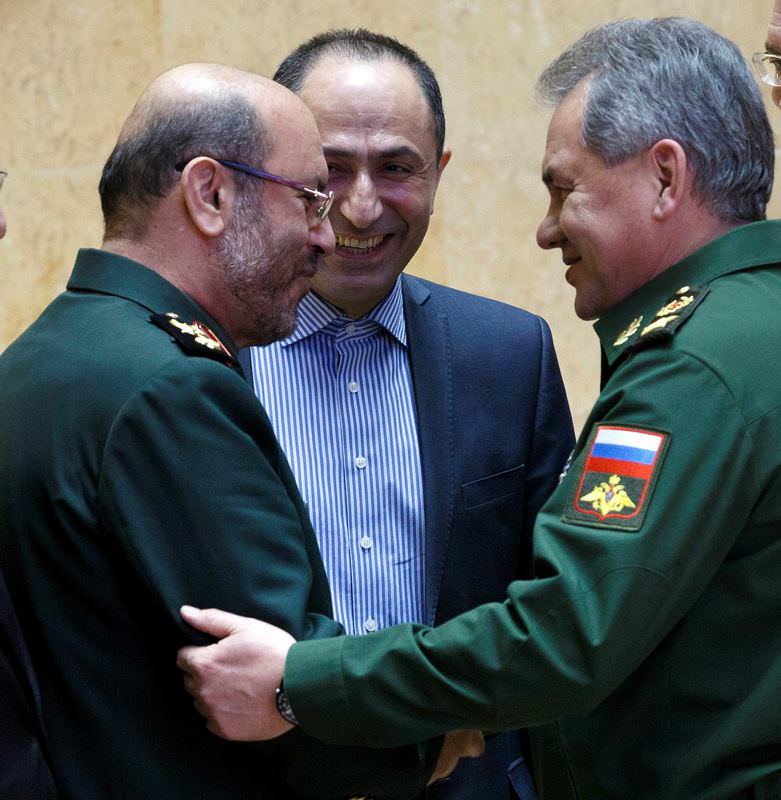 Following a meeting between Russian Defense Minister Sergei Shoigu and his Iranian counterpart Hossein Dehghan, the two countries have declared that military cooperation will be increased while certain media outlets said Russia will sell high-tech weapons to Iran

Iran and Russia which support Syria's Bashar Assad eagerly, have agreed to increase military cooperation during Iranian Defense Minister Hossein Dehghan's visit to Moscow. The increasing cooperation between the two countries have been worrying the West and Turkey since both Moscow and Tehran have pledged their support to the Syrian regime and Russian warplanes directly target civilians. Russian Defense Minister Sergei Shoigu said Moscow and Tehran were ready to step up their military cooperation after meeting with his Iranian counterpart on Tuesday. "I am convinced that our meeting is going to contribute toward reinforcing friendly relations between Russian and Iranian armed forces," said Shoigu in a statement. Iran's Dehghan and Shoigu spoke about "the necessary measures for the progressive development" of their military cooperation, based on the accord signed in January between Tehran and Moscow, the statement said.

The two countries are also "ready to coordinate their approaches on a large number of global and regional issues", Shoigu added, speaking in the "context of the growing crisis in the Middle East. The Russian defense chief did not speak specifically about Syria, where Russia on September 30 sent in its warplanes to launch air strikes at the request of Syria's Bashar Assad, who is also supported by Iran. "Our countries face the same challenges and threats in the Middle East region and it is only together that we will be able to fight them," Shoigu said. "We are seriously with the Syrian government and nation and we have had decisive cooperation with Russia, which has resulted in a change of power balance and creation of a new situation for Syria," Dehghan said and "Reviewing the past agreements to bring faster into result, and the issue of Syria will be among the topic to be discussed during my visit to Russia," he added. "Russian and Iranian officials and military commanders have already warned that in alliance with Syria and Hezbollah, they would continue the fight and take direct action if Damascus and other Syrian cities come under attack from terrorists and their backers… Tehran and Moscow don't trust the regime changers — the War Party and its regional vassals — unless they prove they can be trusted. Which means before anything else, they have to stop supplying arms and harboring extremist outfits. Until then, Tehran, Russia, Syria and Hezbollah will resort to any possible means to protect the elected government of Syria and its territorial integrity. This should not come as a surprise," semi state-run Fars News Agency said in an editorial.

Iran and Russia, long-time allies of Syria, have also reinforced their military and nuclear cooperation since the signing in July of an historic accord between Tehran and the world powers on the Iranian nuclear program. Russia has authorized the delivery of S-300 anti-aircraft batteries to Iran, despite the strong opposition of the Western powers. Russia will send the first S-300 air defense missile system to Iran on Thursday, Russia's RIA state news agency reported on Wednesday quoting an unidentified source. Russia will also sign this year a contract with Iran to supply a batch of its Sukhoi Su-30SM multi-role fighter jets to the Islamic Republic, RIA news agency on Wednesday quoted a senior official at Russia's arms export agency as saying. "According to reports, Iran is seeking to buy Russian Su-30 and Yak-130 jets; the Mi-8 and the Mil Mi-17 helicopters; the K-300P Bastion-P Russian mobile coastal defense missile system equipped with Yakhont anti-ship missiles, in addition to diesel-electric submarines and other military equipment. There are also reports that Iran is interested in purchasing T-90 tanks. Tehran, could also seek Russian expertise in repairing Iran's fleet of the Mikoyan MiG-29s, Sukhoi Su-24MKs and submarines," Russia Today reported.

On November 23, Moscow lifted a ban on the sale and delivery of technological materiel tied to the nuclear industry after a meeting between Russian President Vladimir Putin and Iran's leader Hassan Rouhani. Iran's defense chief who arrived on Monday in Moscow also met with Putin and Deputy Prime Minister Dmitri Rogozin.

The Arab uprisings, which euphorically swept across the Middle East and North Africa, attracted Syrians who had lived under the dictatorship of the Assad family since 1970, when Bashar's father Hafiz Assad seized power. Since then, the majority Sunnis were forced to live in a police state that controlled every movement, organization or business through the use a wide-ranging intelligence service. In March of 2011, Syrians were emboldened enough to raise their voices against the dictatorship. However, the regime's response was not as peaceful as the protests, and the country was subsequently dragged into a deadly civil war after opposition groups took up arms against the government. The opposition groups have also been divided internally. While moderate opposition groups like the Western-backed Free Syrian Army (FSA) were struggling for a democratic Syria where all religious and political groups would be free to exist, radical elements like al-Qaida's Syrian branch Nusra Front or DAESH aimed to establish a new Syria, ruled by an extremist religious jurisprudence. While the war continued among the groups and the regime forces, and other groups loyal to the regime like Iran-backed Hezbollah, the U.S.-led anti-DAESH coalition and the regime supporter Russia have also involved in the war. Russia's airstrikes have largely targeted moderate rebels while Iranian troops on the ground have been leading militias. Russia which also enjoys the power of veto right in United Nations Security Council has changed the balances in the war in favor of the regime.
RELATED TOPICS