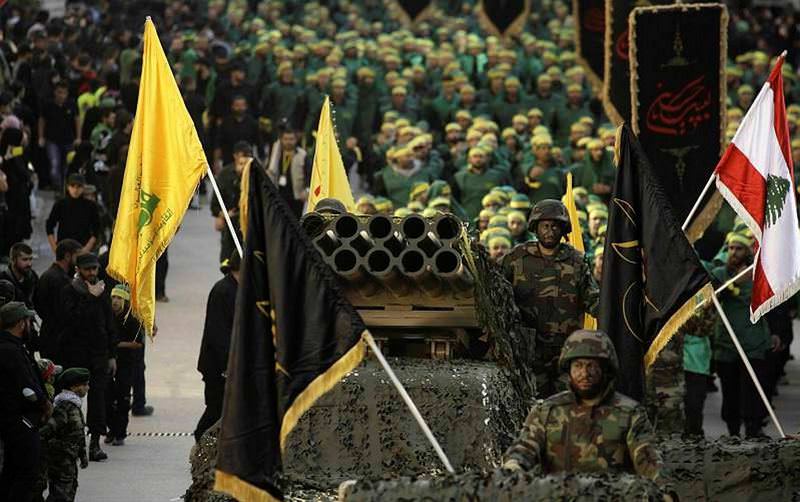 Members of Lebanon's militant Shiite group Hezbollah stand on a pick-up truck mounted with a multiple rocket launcher as they take part in a parade.
by Compiled from Wire Services Feb 25, 2016 12:00 am

Along with Saudi Arabia's $4B cut to military aid to Beirut due to the increasing role of the Lebanese-based Shiite militant group Hezbollah in Syria on the side of the regime, Riyadh, the UAE and Bahrain urged their citizens not to travel to Lebanon

Saudi Arabia, Bahrain and the United Arab Emirates on Tuesday urged their citizens not to travel to Lebanon, days after Riyadh cut $4 billion in aid to Lebanese security forces. The Saudi Foreign Ministry's announcement, carried by the state-run Saudi Press Agency, urged citizens already there to depart or to be in contact with the Saudi Embassy in Beirut. It gave no reason for the warning other than unspecified safety concerns. The United Arab Emirates followed by saying it would pull most of its diplomats out of Lebanon and warned its own citizens not to travel there, according to a statement carried by the state-run WAM news agency. It did not elaborate or offer a reason for the decision. Bahrain issued its own statement late Tuesday, telling citizens of the tiny island kingdom of Saudi Arabia to avoid travel to Lebanon, while telling citizens already there "to promptly leave and to exercise extreme caution at all times." It offered no reason for the order.

Saudi Arabia announced Friday that it was halting deals worth $4 billion aimed at equipping and supporting Lebanese security forces in retaliation for Lebanon siding with Iran in the Sunni kingdom's spat with the Shiite power. Lebanon's main political divide pits a Sunni-led coalition against another led by the Iran-backed Shiite Hezbollah movement. Lebanon has seen a series of militant attacks in recent years linked to the conflict in neighboring Syria. Bahrain and the UAE, both Sunni-ruled nations, backed Saudi Arabia in its dispute with Iran, which erupted at the beginning of the year when the kingdom executed a prominent Shiite cleric and protesters later stormed Saudi diplomatic posts in Iran.

Saudi ambassador to Lebanon Ali Awad Asiri on Tuesday called on Lebanon to "return to the Arab fold." Asiri held a press conference after meeting Lebanese religious delegations that visited the Saudi embassy in Beirut to express solidarity with the oil-rich kingdom. The ambassador said the visit reflected "the Lebanese peoples' love for Saudi Arabia and desire to maintain close relations between the two countries." Asiri said that "those who seek to harm these relations don't represent the Lebanese people or Lebanon", going on to assert, in a veiled reference to Hezbollah that "a certain Lebanese group is working against the interests of its country." He went on to urge Lebanon and its people to "return to the Arab fold." Saudi Arabia, the ambassador stressed, was keen to see Lebanon "maintain its security, allowing it to shoulder its responsibilities." At a press conference held Monday, former Lebanese Prime Minister Saad Hariri called on Saudi Arabia and other members of the six-nation Gulf Cooperation Council (GCC) "not to give up on Lebanon and to keep supporting it" with a view to preventing the country from "falling into the Iranian abyss." Hariri also called on the Lebanese people to sign a "document of solidarity" with the Arab Gulf States.

In Lebanon's tangled political scene, Saudi Arabia and its Gulf allies are staunchly opposed to Hezbollah, a political party in the governing coalition that also has a powerful militia backed by Iran, Riyadh's arch regional rival. Hezbollah fighters are playing a crucial role fighting alongside Syria's Bashar Assad's forces in the Syrian civil war. Saudi Arabia and the other Sunni Gulf Arab states are opposed to Assad. Relations between Shiite Iran and Saudi Arabia hit a new low last month when Saudi authorities executed Saudi Shiite cleric Nimr al-Nimr, along with three other Shiites and 43 members of al-Qaida, on terrorism charges. Iranian protesters attacked Saudi diplomatic missions in the country, leading the kingdom to cut off ties.
RELATED TOPICS