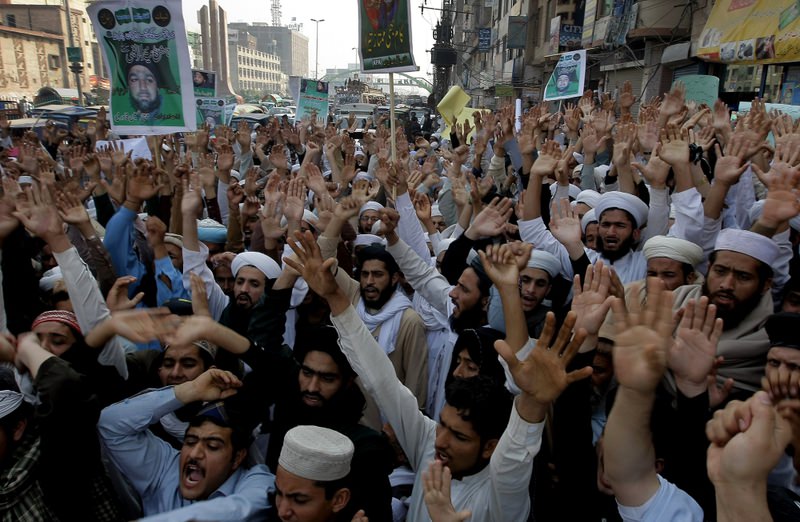 Protestors took to the streets in Pakistani cities after Mumtaz Qadri, who killed a former governor for opposing the country's blasphemy laws, was hanged Monday. Authorities have stepped up security to prevent mass demonstrations

On Monday, Pakistan hanged the man who killed a provincial governor for seeking reform of the blasphemy law, angering supporters who feted Mumtaz Qadri as a hero and threatened violent retribution against the state.

Security was stepped up at flashpoints across the country including the garrison city of Rawalpindi, where hundreds of supporters gathered at the Qadri family home, as officials braced for protests from hardliners. Most schools closed down yesterday in the capital of Islamabad and the nearby garrison city of Rawalpindi, in fear of violence by supporters of Mumtaz Qadri.

Qadri, a police bodyguard to Salman Taseer, shot the liberal Punjab governor 28 times while in an Islamabad market in 2011. He said he was angry at the politician's calls to reform the blasphemy law. Blasphemy is a hugely sensitive issue in the Islamic republic of approximately 200 million, and Qadri was hailed as a hero by many conservatives, eager to drown out calls to soften the legislation.

Critics, including European governments, say the law – which carries the death penalty – is misused, with hundreds languishing in jails under false charges. Analyst Hasan Askari said the next 24 hours would be "sensitive" for the government, adding that Islamabad had weighed the danger of mass violence against the need to "wash away the suspicion" of sympathy for militancy. "Qadri was hanged in Adiala jail early on Monday morning" in Rawalpindi, senior local police official Sajjid Gondal told AFP.

Mosques near the Qadri family home in Rawalpindi broadcast the news, with cries heard from inside the house as hundreds of mourners arrived. Paramilitary Ranger forces and police in riot gear, as well as ambulances and dozens of police vehicles, were stationed at the house early on Monday. But they melted away by mid-morning, an AFP reporter said, leaving mourners forming a queue roughly a kilometer long to view the body on display at a nearby compound. "I have no regrets," Mumtaz's brother Malik Abid told AFP, tears rolling down his cheeks, while women chanted nearby. He said the family had been called to the prison on Sunday evening by officials who said Qadri was unwell. But when they arrived, Qadri greeted them with the news that authorities had deceived them and that his execution was imminent. "We started crying, but he hugged us and chanted 'God is great,'" Abid said. "I am proud of the martyrdom of my son," Qadri's father Bashir Awan told AFP, adding he was ready to sacrifice all five of his other sons "for the honor of the Prophet."

Earlier authorities blocked roads in Rawalpindi and Islamabad, bringing morning traffic to a standstill. Protesters in Islamabad burned tires and briefly attacked a local news van. In the port mega-city of Karachi, demonstrators blocked main intersections. Police said security had been tightened in Karachi and in the eastern city of Lahore, while hundreds also protested in Pakistani-held Kashmir.

Taseer's son Shehryar said on Twitter that the hanging was a victory for Pakistan, but not his family. "The safe return of my brother is the only victory my family wants," he wrote, referring to his sibling Shahbaz Taseer, who was kidnapped later in 2011, reportedly by the Taliban – despite being given a police escort after his father's killing. Twitter users praised the execution, with some hailing it as "justice served."

In addition to calling for reform of Pakistan's blasphemy law, Taseer had been vocal in his support of Asia Bibi, a Christian woman who has been on death row since 2010 after being found guilty of insulting the Prophet Mohammed. Qadri's lawyers drew on Islamic texts to argue that he was justified in killing Taseer, saying that by criticizing the law, the politician was himself guilty of blasphemy.

That argument was rejected by the Supreme Court, which in December upheld the death sentence, sparking protest rallies. Pakistan ended a six-year moratorium on the death penalty in December 2014. Last month, authorities announced they had executed 332 people to date.
RELATED TOPICS