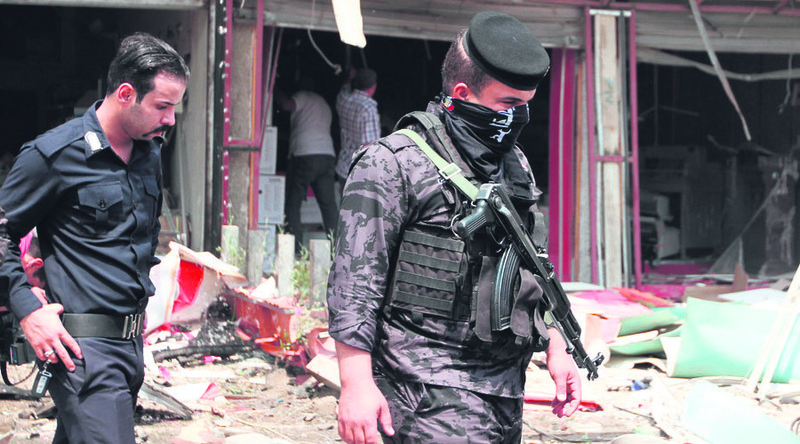 Two Iraqi police officers inspect damage after an explosion that killed more than 60 people.
by Compiled from Wire Services Mar 07, 2016 12:00 am

While the Iraqi army along with Iranian-backed Shiite militias and with U.S. air support, is planning to re-capture DAESH's stronghold of Mosul by the end of the year, a DAESH attack in Baghdad killed more than 60

DAESH claimed responsibility for a suicide attack with an explosive-laden fuel tanker on an Iraqi police checkpoint south of Baghdad, killing at least 60 people and wounding more than 70, medical and security officials said. Responsibility was claimed in a posting on the website of the Amaq news agency, which supports the extremist group. "A martyr's operation with a truck bomb hit the Babylon Ruins checkpoint at the entrance of the city of Hilla, killing and wounding dozens," the statement on the Amaq website said. Hilla is the capital of Babylon province, a predominantly Shiite region with some Sunni presence. "It's the largest bombing in the province to date," Falah al-Radhi, the head of the provincial security committee, told Reuters. "The checkpoint, the nearby police station were destroyed as well as some houses and dozens of cars." A provincial hospital official confirmed the number of casualties. Many had suffered burn injuries.

Iraq has seen a spike in violence in the past month with suicide attacks in and outside Baghdad, all claimed by DAESH, killing more than 170 people. DAESH controls large swaths of Iraq and neighboring Syria. According to United Nations figures, at least 670 Iraqis were killed last month due to ongoing violence, of whom about two-thirds were civilians.

Despite the attacks and the fact that DAESH has strongholds in Iraq, the Iraqi army along with Iranian-backed Shiite militias have advanced against the group as they took Samarra and Ramadi in the last months and now their goal is to re-capture Mosul. It will take many more months to prepare Iraq's still struggling military for a long-anticipated assault on DAESH's biggest stronghold in the country, the city of Mosul, U.S. and Iraqi officials say and it may not even be possible to retake it this year, despite repeated vows by Prime Minister Haider al-Abadi. As the U.S. and its allies furiously work to train thousands more troops for the daunting task of retaking Iraq's second largest city, DAESH fighters are launching a diversion campaign of bloody suicide attacks in Baghdad and elsewhere. Their aim is to force Iraq's already overburdened security forces to spread even thinner to protect the capital and other cities rather than prepare the Mosul operation. Iraq's answer to that has been to plan to build a wall around the capital. Meanwhile, the U.S.-led coalition and the Iraqis are struggling to protect pockets of territory that have been recaptured from the extremists to free up forces for Mosul. "Mosul will be very complicated, it will be a mix of forces and it will be very important to ensure it's well planned," Brett McGurk, President Barack Obama's envoy to the U.S.-led coalition fighting DAESH, said Saturday. U.S. Army Col. Christopher Garver, a spokesman for the coalition, put it more bluntly. "The forces that are going to conduct that assault into the city, they're not in place yet."

The northern city of Mosul, once home to more than a million people, was the biggest prize captured by DAESH. While Iraqi forces have clawed back some territory in the past year, retaking Mosul is considered crucial for breaking the group's back in the country. Estimates of the number of DAESH fighters in Mosul vary from a few thousand to "not more than 10,000," according to the coalition.

The Iraqi military is still struggling to regroup. When Mosul fell to DAESH, more than a third of the military disintegrated as thousands of soldiers shed their uniforms and dropped their weapons to flee. In the following months, tens of thousands more Iraqi troops were identified as "ghost soldiers" nonexistent troops whose pay was pocketed by senior commanders. The U.S.-led coalition began a training program months later in December 2014, but so far only 18,500 soldiers and security forces have been trained in courses which last around seven weeks. Experts question whether such a crash course is adequate preparation. Coalition and Iraqi officials estimate eight to 12 brigades, or an estimated 24,000 to 36,000 troops, will be needed for the operation to capture Mosul. So far, 2,000 to 3,000 Iraqi troops have been deployed at Makhmour base, the likely staging ground for a Mosul assault, located 40 miles (67 kilometers) southeast of the city. "We are all trained, qualified and ready for battle. But this force is not enough to retake Mosul," said Iraqi Lt. Col Mohammed al-Wagaa, stationed at Makhmour. "The battle for Mosul is going to take a long time."

Under political pressure to show victory, al-Abadi has repeatedly vowed to "liberate" Mosul this year. But U.S. Lt. Gen. Vincent Stewart, head of the Defense Intelligence Agency, told Congress last month, "I'm not as optimistic." Stewart said they may be able to begin "isolation operations" around the city, but "securing or taking Mosul is an extensive operation and not something I see in the next year or so." The Iraqi military's few competent, battle-tested units are scattered, helping hold various front lines against DAESH in the country's central and western provinces or tied down controlling cities and towns retaken from the militants since other security forces aren't capable. Iraq's elite counterterrorism forces have units near Tikrit and Baiji in central Iraq and Habaniya in the west. In Ramadi, capital of western Anbar province, a counterterrorism commander said his unit has to remain there because local police forces can't maintain control. He spoke on condition of anonymity because he's not authorized to talk to the press. "You can't just pick up and leave," Garver said. Without proper forces in place, "DAESH comes back in and seizes terrain that you just spent months taking from them," he said.
RELATED TOPICS