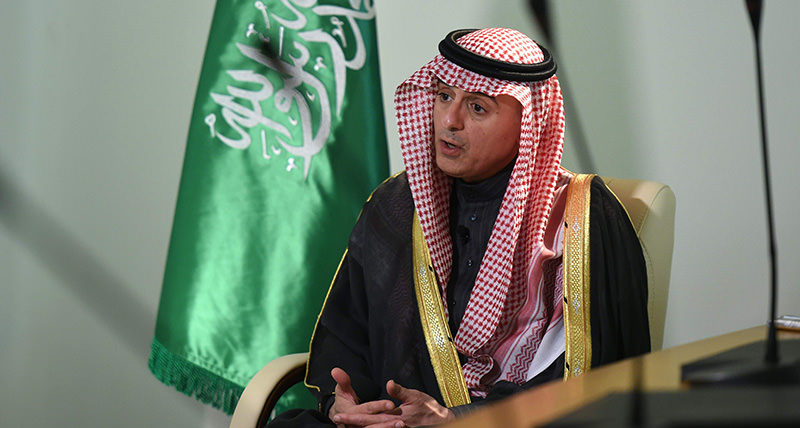 Saudi Foreign Minister Adel al-Jubeir said they could build strong relations with Iran if it changes its policies. Tensions between the two countries have risen over various reasons such as Hezbollah and each other’s involvement in the Syrian and Yemeni civil wars

Saudi Arabia and other Gulf monarchies could turn a page and build strong relations with Iran if it respects them and stops "meddling" in their affairs, Saudi Foreign Minister Adel al-Jubeir said Wednesday.

"If Iran changes its way and its policies, nothing would prevent turning a page and building the best relationship based on good neighborliness, with no meddling in the affairs of others," he told reporters in Riyadh. "There is no need for mediation" in such a case, said Jubeir, whose country severed all links with Iran in January after crowds attacked the kingdom's diplomatic missions in Iran after Saudi Arabia executed prominent Shiite cleric Nimr al-Nimr.

Jubeir said relations with Tehran had deteriorated "due to the sectarian policies" followed by Shiite Iran and "its support for terrorism and implanting of terrorist cells in the countries of the region." "Iran is a neighboring Muslim country that has a great civilization and a friendly people, but the policies that followed the revolution of (Ayatollah Ruhollah) Khomeini have been aggressive," he said.

Jubeir was speaking after a meeting of Gulf foreign ministers and their counterparts from Jordan and Morocco. In a joint statement, the ministers meeting in Riyadh urged Iran to respect U.N. Resolution 2231, which endorsed the Iranian nuclear deal and included curbs on ballistic missiles, as Tehran defiantly fired two more missiles on Wednesday. The ministers "stressed the importance of implementing the [U.N.] Security Council Resolution 2231 concerning the nuclear deal, including what concerns ballistic missiles and other weapons," it said. U.S. Vice President Joe Biden said Wednesday that the United States would take action against Iran if the missile tests were confirmed.

Jubeir claimed that Lebanon is now run by Hezbollah. "What is disturbing in the Lebanon question is that a militia that is classified as terrorist controls decision making in Lebanon," he said. Jubeir criticized a recent decision by a Lebanese court to release a Syria-linked former minister who is facing charges of having planned terrorist acts. Michel Samaha's release "does not positively indicate that the army is independent of Hezbollah's influence," he said.

Asked about further Gulf sanctions on Hezbollah, Jubeir said the foreign ministers of the Gulf Cooperation Council (GCC) had decided to look into measures that "would prevent Hezbollah from benefitting from GCC states."

Riyadh and its Gulf Arab allies have stepped up sanctions on Hezbollah and its alleged leaders since 2013 in retaliation to its intervention in Syria to support Assad. Last month Saudi Arabia froze the assets and prohibited dealings with three Lebanese nationals and four companies in its latest action against Hezbollah.