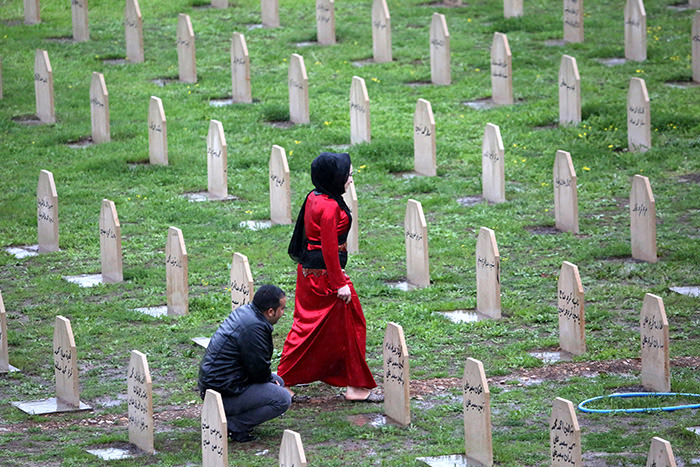 Kurdish populations around the world commemorated the 28th anniversary of thousands killed in the Halabja chemical attack committed by the then Baathist regime in Iraq.

Thousands of people were killed with chemical weapons on the command of Saddam Hussein.

Kurdistan Regional Government (KRG) President Masoud Barzani sent a message on Wednesday over Twitter commemorating the incident: "Halabja is a symbol of oppression of people of Kurdistan. Today we renew our vow that blood & sacrifices of our people will not be in vain."

The director general of The Hague-based Organisation for the Prohibition of Chemical Weapons, Ahmet Üzümcü, issued a statement commemorating the massacre.

"The memory of Halabja serves as painful reminder of human cost claimed by these dreadful weapons. It is our responsibility – to the victims and to the humanity in general – to ensure that no-one is ever again exposed to such untold suffering," the statement said.

Until a U.S.-led invasion toppled Hussein in 2003, his ruling Baath Party had maintained a tight grip on the country for more than three decades.

According to official numbers, 5,000 people were killed and 7,000 injured when Iraq's then-president ordered a chemical attack on the city on March 16, 1988.

The Halabja chemical attack was mounted by the then-Iraqi government in the northern town near the Iranian border during the closing days of the Iran-Iraq War.

The massacre was part of the larger Al-Anfal campaign in which Baathist Iraq sought to punish insurgent Kurdish groups and terrorize local Kurds, Turkmens, Assyrians and other minorities. Revenge for the unfruitful, eight-year Iran-Iraq War, initiated by the West-backed Iraqi regime, which led to heavy losses both countries, was taken on the Kurds. During the campaign, more than 100,000 civilians were murdered, hundreds of settlements were wiped out and chemical weapons were used. Both Hussein, and his cousin Ali Hassan al-Majid, infamously known as "Chemical Ali," were tried and sentenced to death for their crimes in the campaign.

There are three cemeteries in Halabja for those killed in the massacre.

One of the cemeteries has 1,500 graves, 440 people were buried in the second and the third has 24 bodies buried one on top of the other. The rest of the victims remain missing. These cemeteries, which were arranged by the survivors of the massacre, have been turned into mausoleums frequently visited by local people as well as relatives of the victims. Signs at the entrances to the cemeteries read: "Baath Party members cannot enter!".