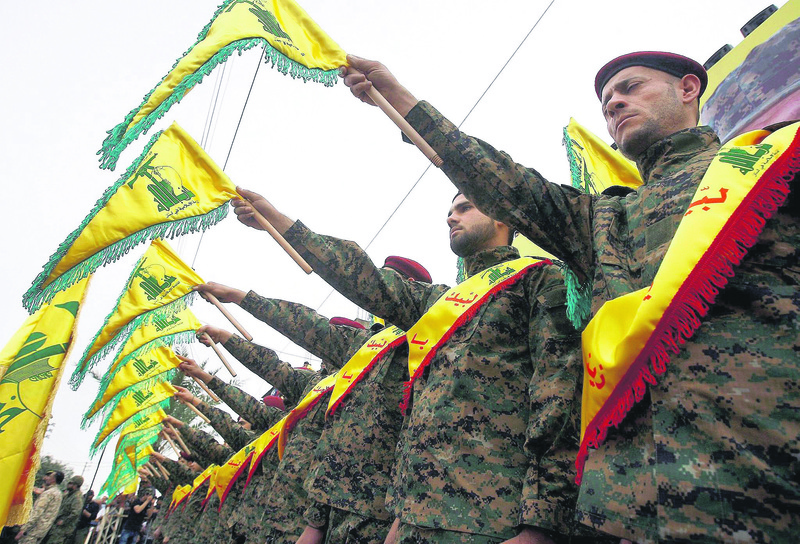 Hezbollah fighters hold the group's flag as they attend a ceremony in South Lebanon.
by Daily Sabah with Wires Mar 18, 2016 12:00 am

After designating the Lebanon-based Shiite militant group Hezbollah, which is backed by Saudi Arabia's regional rival Iran and fights in Syria and Yemen, as a terrorist organization, Riyadh has taken the step of freezing the bank accounts of the group's supporters

The Saudi Interior Ministry will freeze the bank account of any citizen who is in contact with the Lebanon-based Shiite militant group Hezbollah, Al Arabiya reported yesterday. "The temporary freeze of accounts for three or more months will include liquid assets as well as the seizure of properties until the investigations have been completed. The sources said that expatriates supporting or sympathizing with terrorist organizations, including Hezbollah, will be deported after serving their jail terms and prevented from entering Saudi Arabia again," the web page said. Quoting anonymous sources the report said the Bureau of Investigation and Public Prosecution will investigate the suspects before sending them to court.

It is the latest move by the Riyadh administration against Hezbollah and its sympathizers within the country who generally belong to the Shiite minority. The harsh actions against Hezbollah are hoped will both undermine the group's activities in Syria and isolate the country's own minority from the ongoing regional crisis, which has gained a sectarian tone. The six-member Gulf Cooperation Council (GCC) branded Hezbollah a terrorist organization last month, opening up the possibility of further sanctions against the group that wields influence in Lebanon and fights in Syria. In 2013, the Sunni-dominated GCC, representing Saudi Arabia, United Arab Emirates, Bahrain, Kuwait, Oman and Qatar, imposed sanctions on Shiite Hezbollah after it entered Syria's war in support of Bashar Assad. The GCC did not specify what action might be taken against Hezbollah. But last week Saudi Arabia, the biggest power in the GCC, said it had blacklisted four companies and three Lebanese men for having links to the group. Relations between Lebanon and Saudi Arabia have been plunged into crisis since Riyadh halted $3 billion in aid to the Lebanese army, a response to the Beirut government's failure to condemn attacks on Saudi diplomatic missions in Iran. In January, Riyadh led several Arab countries in cutting diplomatic ties with Tehran after demonstrators burned its embassy and a consulate in protest against the execution of prominent, dissident Shiite cleric Nimr al-Nimr by Riyadh.

Saudi Arabia, Bahrain and the United Arab Emirates also urged their citizens not to travel to Lebanon. The Saudi Foreign Ministry's announcement, carried by the state-run Saudi Press Agency, urged citizens already there to depart or to be in contact with the Saudi Embassy in Beirut. It gave no reason for the warning other than unspecified safety concerns. The United Arab Emirates followed by saying it would pull most of its diplomats out of Lebanon and warned its own citizens not to travel there, according to a statement carried by the state-run WAM news agency. It did not elaborate or offer a reason for the decision. Bahrain issued its own statement, telling citizens of the tiny island kingdom of Saudi Arabia to avoid travel to Lebanon, while telling citizens already there "to promptly leave and to exercise extreme caution at all times." It offered no reason for the order. Finally Qatar and Kuwait urged their citizens not travel to Lebanon and leave the country if they are already there. In Lebanon's tangled political scene, Saudi Arabia and its Gulf allies are staunchly opposed to Hezbollah, a political party in the governing coalition that also has a powerful militia backed by Iran, Riyadh's arch regional rival. Moreover, it is claimed that Hezbollah has started fighting on the side of Houthis in Yemen. Yemen's Gulf-backed government last month accused the militant group of training the Houthi rebels and fighting alongside them in attacks on Saudi Arabia's border. The assertion is based on "many documents and physical evidence" which Hezbollah would not be able to deny, it said.