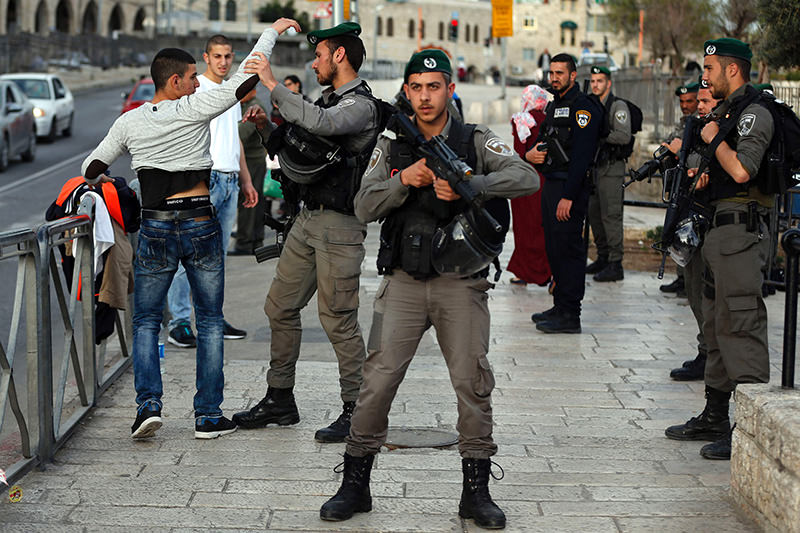 Israeli security forces a Palestinian young man at the entrance of Damascus Gate, outside Jerusalem's Old City, on March 9, 2016. (AFP Photo)
by Anadolu Agency Mar 22, 2016 12:00 am

Israel on Tuesday imposed restrictions on the entry of Palestinians into occupied East Jerusalem's flashpoint Al-Aqsa Mosque complex -- for the first time since last October -- to coincide with the upcoming Jewish holiday of Purim, a Palestinian official has said.

Sheikh Azzam al-Khatib, director-general of the Organization for Muslim Endowments and Al-Aqsa Affairs, told Anadolu Agency that Israeli police were now preventing Palestinian men under 50 from entering the mosque.

The Israeli authorities have also deployed additional police forces and erected roadblocks near the gates of the mosque compound.

On Monday night, Israeli police arrested 17 Palestinians after raiding their homes in Jerusalem and barred them from entering the compound until further notice.

On Tuesday, the Israeli army announced plans to impose a "general closure" on the occupied West Bank during the upcoming Jewish holiday of Purim.

According to an army statement, all checkpoints between Israel and the West Bank will be sealed, except for "humanitarian" cases.

The closure will begin on midnight Wednesday and continue until Saturday evening, according to the statement.

Israeli Radio, meanwhile, reported that the Erez border crossing between Israel and the blockaded Gaza Strip would likewise be closed from Wednesday to Friday.