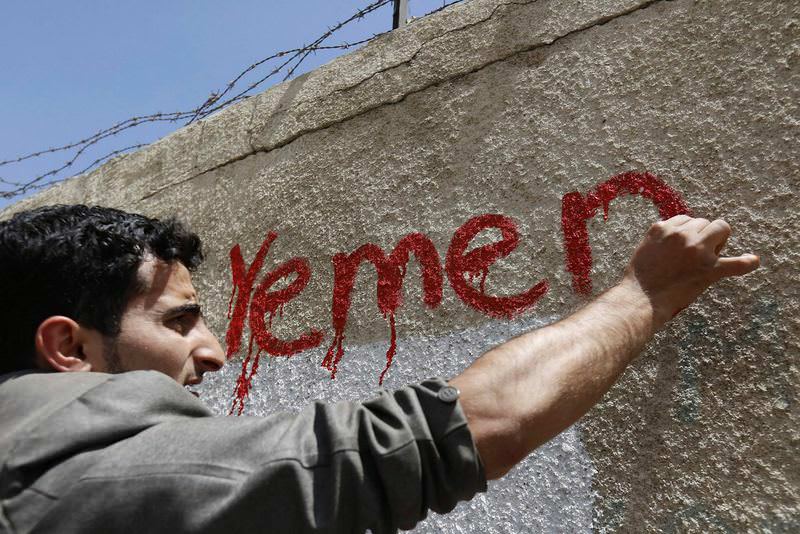 A Yemeni activist writes 'Yemen' at a graffito in support of peace in the war-affected country, at a wall along a street in Sanaa.
by Daily Sabah with Wires Mar 22, 2016 12:00 am

Iranian-backed Houthi rebels and the internationally recognized government agreed on a temporary cease-fire to intensify peace talks under the mediation of the U.N. in war-torn Yemen

Iranian-backed Yemeni Shiite rebels and the internationally recognized government have agreed to begin a ceasefire for a week or two before their next round of negotiations which are expected in April, Yemeni officials said Sunday. The officials participated in Sunday's talks in Sanaa, the capital, between the rebels and the U.N. envoy to Yemen, Ismail Ould Cheikh Ahmed. All officials spoke on condition of anonymity because they were not authorized to brief reporters. According to the officials, the Shiite rebels known as Houthis have agreed to implement a U.N. security council resolution which requires them to hand over their weapons and withdraw from territory they occupy, including Sanaa. Officials with the internationally recognized government also said Sunday they agree to the ceasefire as a first step for the warring sides to show their good intentions. Previous attempts to implement a ceasefire in Yemen have failed to take hold on the ground, with each side accusing the other of immediately violating the terms. A first round of talks was held in Switzerland in December, but they never resumed.

The Saudi-led coalition began a military campaign a year ago with the aim of preventing the Houthi group and forces loyal to Yemen's ex-president Ali Abdullah Saleh from taking control of the country. It also aims to restore President Abd-Rabbu Mansour Hadi to power in the capital Sanaa. While the Saudi Arabia-led coalition attempts to break Houthi power across the country through bombing military strongholds and Houthis respond with attempts to expand the territories under their control, both Sunni and Shiite civilians suffer from the conflict. More than 6,000 Yemenis, about half of them civilians, have been killed in the fighting and airstrikes over the past year, the United Nations says. Millions more have been displaced. Yemen's slide into civil war has made the country a crucial front in mostly Sunni Saudi Arabia's rivalry with Shiite Iran, which Riyadh accuses of stirring up sectarian strife through its support for the Houthis. The advance of the Iranian-allied Houthi group raises fears of the possible disintegration of the country. Sanaa has been under Houthi rebel control since September of last year. The country has been facing severe political instability after the takeover of the presidential palace by Houthi militants prompted Hadi to tender his resignation. Hadi fled to the southern port city of Aden where he has re-established his presidency. As the country continues to be dragged into civil war, the U.N. has started to hold mediated peace talks between Houthis and Hadi's government in a bid to bring peace and stability back to the country.

Yemen is also of crucial importance for the U.S., as the country is home to one of their worst enemies, al-Qaida's deadliest franchise, al-Qaida in the Arabian Peninsula (AQAP), which has orchestrated numerous high-profile terrorist attacks, including claiming responsibility for the Jan. 7 Charlie Hebdo massacre in Paris. Since 2002, the U.S. has been conducting counter-terror strikes and operations against radical militants as part of U.S. national security policy. During U.S. President Barack Obama's time in office, there have been 15 airstrikes and 107 drone strikes in Yemen as part of a "targeted killing policy." The practices of the Obama administration raise serious laws of war concerns regarding the human cost of U.S. security policy in Yemen.