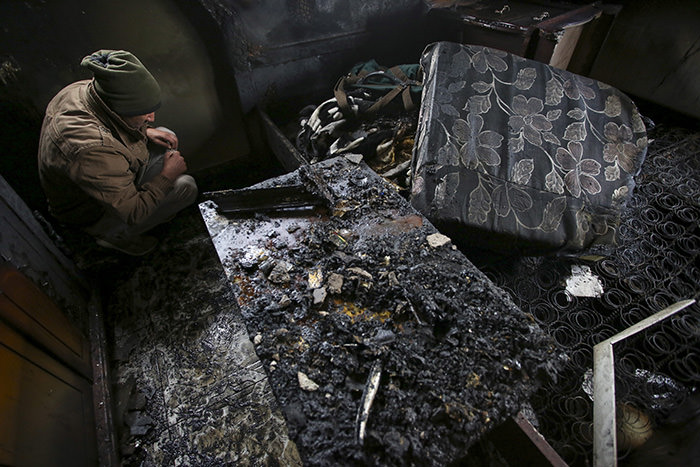 The smell of fire and fuel lingers in Ibrahim Dawabsheh's charred kitchen, days after his home was the target of a suspected arson attack on Sunday.

The whole home was scarred by the fire that left his wife, who he married in October, so scared she does not want to return to it.

Ibrahim, 25, was the only witness to the July arson attack by Israeli settlers that killed 18-month-old Ali Dawabsheh and his parents Said and Riham and left the family's only survivor, five-year-old Ahmad, with serious injuries. He says he was sleeping in his balcony that night from where he has a clear view of their home.

Ibrahim and others in the Palestinian village Duma believe his role as a witness meant he was targeted, but Israeli police said after initial investigations they did not believe the fire showed the usual signs of a settler attack.

The family said they were told by police that it was probably an attack by a local rival of Ibrahim's father Mohammed Dawabsheh, 52, who lives on the bottom floor of the same building.

"We told them to come to the village and take every person. They will not find one who has a problem with me," says Mohammed.

Ibrahim accuses the police of trying to cover up the incident:

"America told Israel to stop the settler attacks, so the police want to say it wasn't the settlers," he said.

They admit they did not see the alleged attackers, but Ibrahim and relatives living nearby say they heard the voices when the fire broke out at 2 a.m. on Sunday.

The second-story bedroom where Ibrahim and his wife were sleeping is the most blackened of the rooms and the family point out that it backs onto easily-scalable tin roofs, themselves facing fields of olive trees that settlers can sneak through at night from the controversial Adei Ad settler outpost, which lies on a nearby hill-top.

Duma locals insist it was the Adei Ad settlers who targeted Ibrahim, saying that while Sunday's fire and the July attack were the most dangerous, the village has repeatedly been targeted.

"The settlers won't stop with Said, they will continue with Ibrahim and they will keep coming," says Mohammed, who says it is difficult to protect the town because of its status under the 1994 Oslo Accords, which divided the area into Palestinian and Israeli-controlled administrative areas.

Palestinian news agency Maan reported Sunday that the Duma village council had requested funds from the Palestinian Authority to hire night watchmen, but had no response.

"Around the village is [Israeli-administered] Area C, so if the Palestinian police want to come here, they have to ask for permission," he says.

Israeli NGO Yesh Din has said that the illegal Adei Ad outpost is a center for ideological violence and one of its residents, Amiram Ben-Uliel, was charged in January with the murders of Said, Riham and Ali Dawabsheh.

Yesh Din also reported in January that documents filed in relation to government attempts to retroactively legalize the outpost under Israeli law included a record showing that settlers had been sighted returning to Adei Ad from Duma on the night of the July attack.