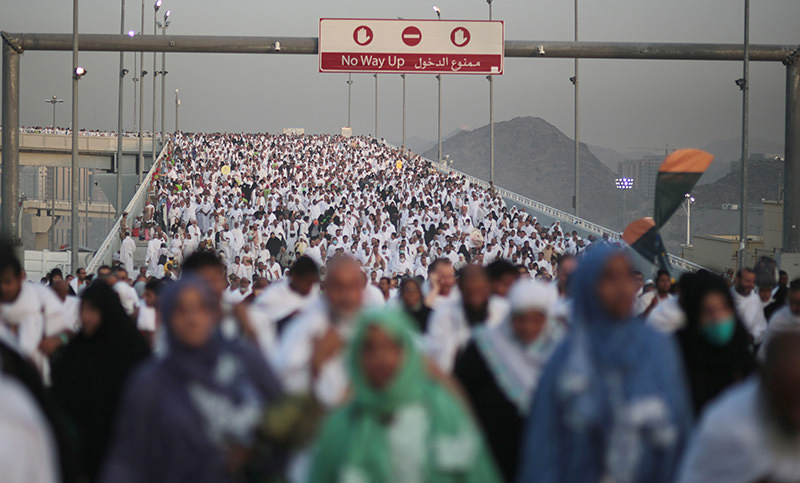 Hundreds of thousands of Muslim pilgrims make their way to cast stones at a pillar symbolizing the stoning of Satan, in a ritual called ,Jamarat,, the last rite of the annual hajj (AP Photo)
by Apr 06, 2016 12:00 am
Iran plans to send a delegation to Saudi Arabia to discuss new arrangements for the hajj pilgrimage to Mecca, Iran's Tasnim news agency said on Wednesday, the first official visit by either side since ties were severed in January.

The pilgrimage was marred last September by a deadly crush that killed hundreds of people, many of them Iranians, which drove up tensions between the two powers.

It comes this year with Sunni powerhouse Saudi Arabia and Shi'ite Iran still locked in a row that has fuelled sectarian tensions in the Middle East.

The head of Iran's hajj organization, Saeed Ohadi, said Saudi authorities had invited Tehran to send a delegation to Riyadh on April 14 to discuss preparations for hajj, which is expected to fall again in September this year.

Ohadi told state news agency IRNA that the Iranian delegation members were still waiting for their visas and were expecting to meet the Saudi haj minister.

"The fate of this year's hajj will be decided in this meeting," Ohadi said, according Tasnim news agency.

Saudi officials could not immediately be reached for a comment.

Saudi Arabia has faced heavy criticism for its handling of the crush last year, in which up to 2,070 people were believed to have been killed according to a Reuters tally, making it one of the deadliest hajj disasters in recent memory.

Saudi officials have stood by their official counts of 769 dead and 934 injured, figures that have not been updated since two days after the crush.

Saudi King Salman ordered an investigation into the causes of the crush, which occurred as two groups of pilgrims converged at a crossroads in a tent city outside Mecca. But more than six months after the disaster, no findings have been published.

Iranian officials have accused Riyadh of mishandling the response and complained of delays in repatriating the bodies of the 461 Iranian nationals who died in Mecca.

The disaster exacerbated tensions between Riyadh and Tehran, as many of the pilgrims killed were Iranian. Saudi Arabia severed ties with Iran after demonstrators angry at the execution of a prominent Shi'ite cleric attacked Saudi diplomatic missions.

Saudi Crown Prince Mohammed bin Nayef bin Abdulaziz, who is also the interior minister and head of the Supreme Haj Committee, vowed at a recent haj committee meeting to "firmly deal" with any attempt to undermine security at the pilgrimage, according to Saudi media.