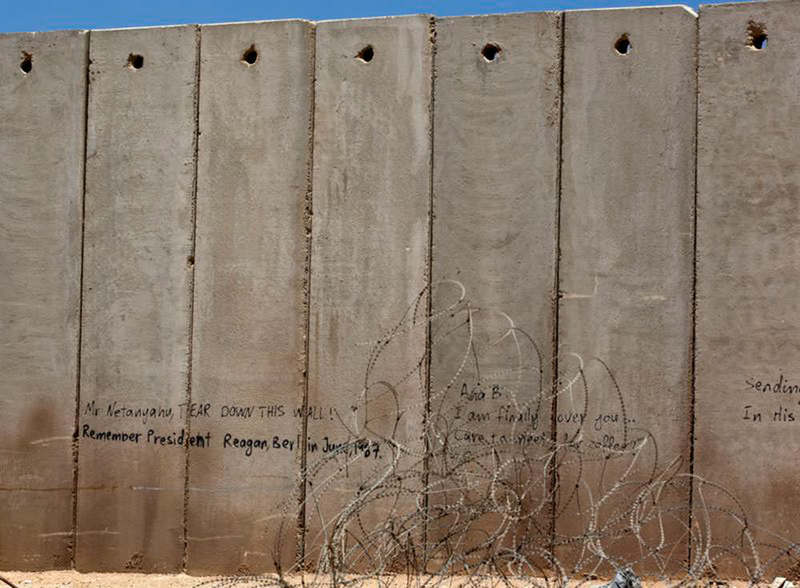 Israel began construction on a controversial part of its separation barrier in the occupied West Bank on Thursday, near a Palestinian Christian town, an AFP journalist reported.

Cranes began lifting eight-metre(yard)-high blocks into place near Beit Jala, south of Jerusalem and close to Bethlehem, a photographer witnessed.

This part of the wall could cut Palestinians from their olive groves.

Nicola Khamis, mayor of Beit Jala, condemned what she saw as a land grab.

"This land is for our families, our children," she said by phone from the bridge next to the construction site.

The Israeli army referred questions to the defence ministry, which did not immediately respond.

Residents of Beit Jala fear the construction of the wall may lead to the expansion of the nearby Israeli settlements of Gilo and Har Gilo.

Khamis said they hoped to battle the wall's construction, with emergency strategy meetings planned, but she conceded they had no further appeals within the Israeli legal system.

After a nine-year legal battle, Israel's high court ruled in July 2015 the wall was legitimate, making only small adjustments.

"Without this land all the Christians will leave this country," Khamis said. "It is impossible to build in Beit Jala. We want to widen Beit Jala."

Israel began building the barrier of walls and fences inside the occupied West Bank in 2002 at the height of the second Palestinian intifada (uprising), saying it was crucial for security.

The Palestinians see it as a land grab aimed at stealing part of their future state and call it the "apartheid wall".

"It is consistent with the Israeli government's policy of consolidating apartheid in the West Bank," Xavier Abu Eid, a spokesman for the Palestine Liberation Organisation, said of Thursday's construction.

"It destroys the prospects for Bethlehem to grow".

In a non-binding decision, the International Court of Justice ruled in 2004 that construction of the barrier was illegal and, like the UN General Assembly, demanded it be dismantled.