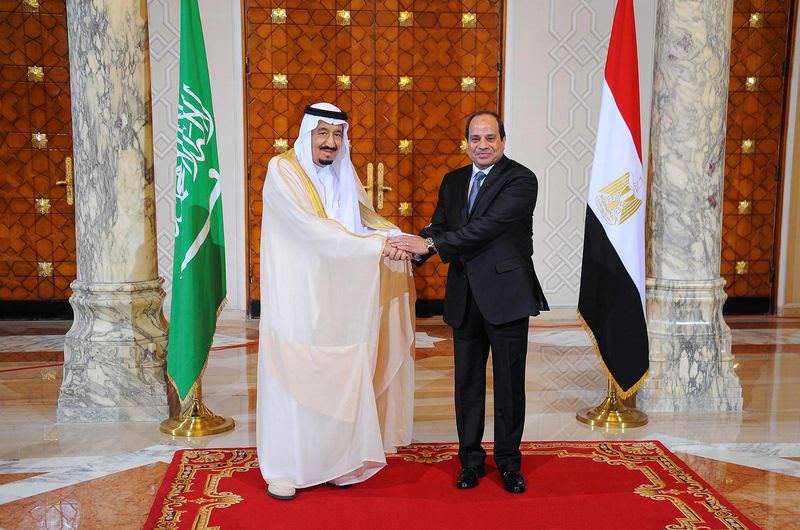 by Daily Sabah with Wires Apr 09, 2016 12:00 am
Saudi Arabia's King Salman bin Abdulaziz is paying an official visit to Egypt to strengthen bilateral relations. The rare foreign trip by the 80-year-old Saudi ruler aims to show that Riyadh still supports Egyptian President Abdel Fattah el-Sissi who overthrew Egypt's first democratically elected President Mohammad Morsi in 2013 with a huge support from the Gulf. Gulf monarchies have lavished aid on Egypt since the coup, but have grown increasingly disillusioned at what they see as el-Sissi's inability to address entrenched corruption and inefficiency in the economy, and at Cairo's reduced role on the regional stage. However, with Iraq, Syria and Yemen immersed in civil war, and Saudi Arabia preoccupied by its own region-wide tussle with Iran, Riyadh is determined to stop the Egyptian state from failing.

The king and the president discussed regional issues and bilateral economic relations during their meeting. "Egypt has a special place in my heart, and the kingdom values it and our strategic relationship with it which is important to the Arab and Muslim worlds. God protect Egypt and its people," King Salman wrote on his official twitter account. ""I welcome my brother His Majesty King Salman bin Abdulaziz Custodian of the Two Holy Mosques to Egypt, his second country," wrote in twitter el-Sissi in response to Salman. Presidential Spokesman Alaa Youssef said that "This is the first official visit by King Salman whose valuable and honorable positions in support of Egypt and its people will never be forgotten."

Despite the warm messages, Saudi Arabia's financial support for strategic ally Egypt will no longer involve "free money" and Riyadh will focus on soft loans and a return on investment to help it grapple with low oil prices, a Saudi businessman familiar with the matter said. "This is a change in strategy. Return on investment is important to Saudi Arabia as it diversifies sources of revenue," the businessman told Reuters on Friday. Low oil prices and differences over regional issues have called into question whether such strong support is sustainable. Egypt is struggling to revive an economy hit by years of political upheaval triggered by the 2011 uprising that ousted President Hosni Mubarak, as well as an extremist militant insurgency based in the Sinai Peninsula. While el-Sissi and Salman were holding a meeting, a DAESH-affiliated local group killed five Egyptian soldiers, two civilians and wounded 15 in Sinai. Several explosive devices were planted on the road and were remotely detonated as soon as the military vehicles passed by.
RELATED TOPICS