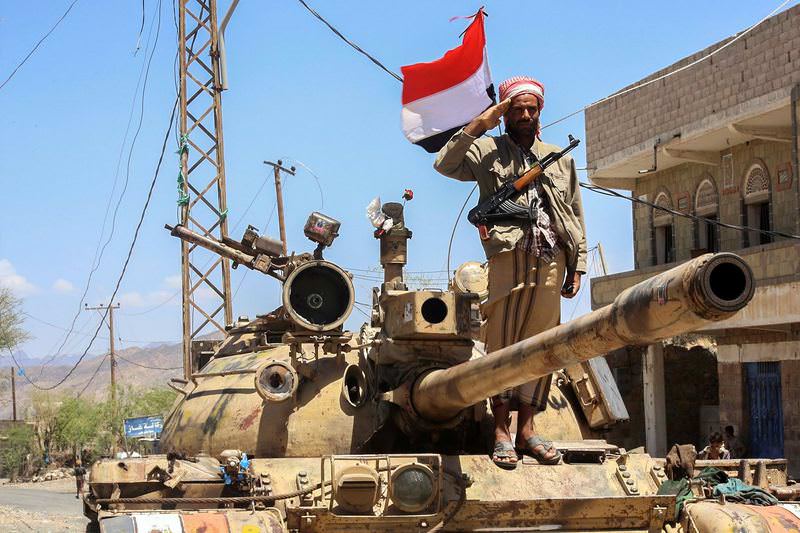 On the second day of a U.N.-mediated cease-fire, Iran-backed Houthi rebels and forces loyal to the internationally recognized government did not stop clashing and al-Qaida killed at least five in a suicide attack

Loyalists and Iran-backed rebel fighters have clashed on several fronts in Yemen, officials said on Tuesday, the second day of a U.N.-brokered ceasefire the insurgents have warned is in jeopardy. Forces loyal to President Abedrabbo Mansour Hadi fought with Shiite Houthi rebels in the province of Marib, east and north of the rebel-held capital Sanaa, officials said. The rebels and their allies loyal to ousted president Ali Abdullah Saleh advanced overnight in the area of Sarwah, in Marib, wresting control of two hills, a military official said. The Saudi-led coalition, which launched a military campaign against the rebels last year, had described violations on Monday as 'minor'.

Seven soldiers have been killed and 15 others wounded in Sarwah in rebel attacks since the ceasefire entered into force at midnight between Sunday and Monday, the official said. There were also clashes in Nihm, northeast of Sanaa, military officials said, while rebels said they confronted an attack by Hadi's forces in the area. The rebels said Monday that pro-government forces were behind 39 violations of the truce, including attacks in Taez and the central province of Baida. They also said warplanes belonging to the Saudi-led coalition flew sorties over several areas of Yemen despite the ceasefire.

Meanwhile, a soldier was killed and nine others wounded in a rebel attack on an army base near the southern city of Baihan which borders Marib province. Rebel spokesman Mohammed Abdulsalam warned in a statement on Facebook that "continued military action endangers the peace process and reduce the chances of holding the forthcoming dialogue" in Kuwait. But violations did not seem to discourage the United Nations which is sponsoring peace talks in Kuwait next week. "The cessation of hostilities seems to be largely holding," U.N. spokesman Stephane Dujarric said Monday, although he noted that there were "some pockets of violence."

A suicide bomber detonated an explosives-laden belt near a football stadium in the southern Yemeni port city of Aden on Tuesday, killing at least four people, witnesses and a security source said. Ten people were wounded in the attack, which appeared to target young army recruits waiting for buses outside a military checkpoint in the city's north, the witnesses and source added. Although any group has not claimed responsibility, al-Qaida is the main suspect.

More than 6,300 people have been killed in the war that has worsened the humanitarian crisis, with more than 80 percent of the population on the brink of famine. The conflict in the impoverished Arabian Peninsula nation has ruined large parts of the country and raised Middle East tensions, with Saudi Arabia and its allies backing the government and Shiite powerhouse Iran supporting the rebels. Nearly half of Yemen's 22 provinces on the verge of famine and over 13 million people need food aid, the U.N.'s World Food Program said last month. UNICEF delivers nutritional supplies and vaccines against measles, polio and other childhood diseases in the country of 24 million, but it is not enough, the U.N. said. A U.N. report said an estimated 320,000 children risk severe acute malnutrition, which can leave a child vulnerable to deadly respiratory infections, pneumonia and water-borne diseases. Nearly 10 million children require humanitarian aid to prevent a further deterioration. Chronic malnutrition can stunt growth and development.

The country has long suffered from political instability and insecurity due to threats posed by various militant groups. Since former President Ali Abdullah Saleh stepped down in 2012, ending his 33-year rule, the country has been in a state of constant turmoil. In addition to clashes between government forces and Houthi militants, the rival militant groups, al-Qaida and the Houthi rebels, have fought a bloody battle to gain control over several places. Yemen is of crucial importance for the U.S., as the country is home to one of their worst enemies, al-Qaida's deadliest franchise, the AQAP, which has orchestrated numerous high-profile terrorist attacks, including claiming responsibility for the Jan. 7 Charlie Hebdo massacre in Paris. Since 2002, the U.S. has been conducting counterterror strikes and operations against radical militants as part of U.S. national security policy.
RELATED TOPICS