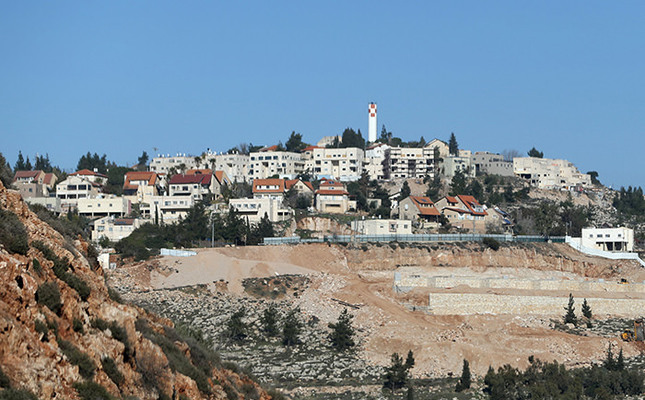 Israeli government has approved a plan to build more than 200 new illegal settlements in the occupied West Bank, an Israeli NGO said on Thursday.

The planned number is up 250 percent in first quarter of 2016 compared to same period last year, the Israeli NGO Peace Now said.

Israel's government has given the green light for the plans for at least 229 homes to move forward and they are now at various stages in the technical process, said Hagit Ofran, a spokeswoman for settlement watchdog Peace Now.

Israel's Peace Now movement, which tracks and opposes Israeli settlement in territory captured in the 1967 war, said the reported seizure of 579 acres (234 hectares) represented the largest land confiscation in the West Bank in recent years.

Despite wide range of criticism and condemnation, Israel continues to build the settlements on the Palestinian land.

International law considers the West Bank and East Jerusalem to be "occupied territories" captured by Israel in 1967, deeming all construction of Jewish settlements on the land to be illegal.

Until today, Israel has continued to misappropriate Palestinian land in the West Bank -- on which it has steadily continued to build Jewish-only settlements -- in breach of international law.

The Palestinian Authority, for its part, continues to call for the establishment of an independent Palestinian state in the Gaza Strip and West Bank, with East Jerusalem -- currently occupied by Israel -- as its capital.

There was no immediate response from Israel's defence ministry regarding the most recent plan approved by the government.