US accuses Netanyahu of leading Israel in wrong direction 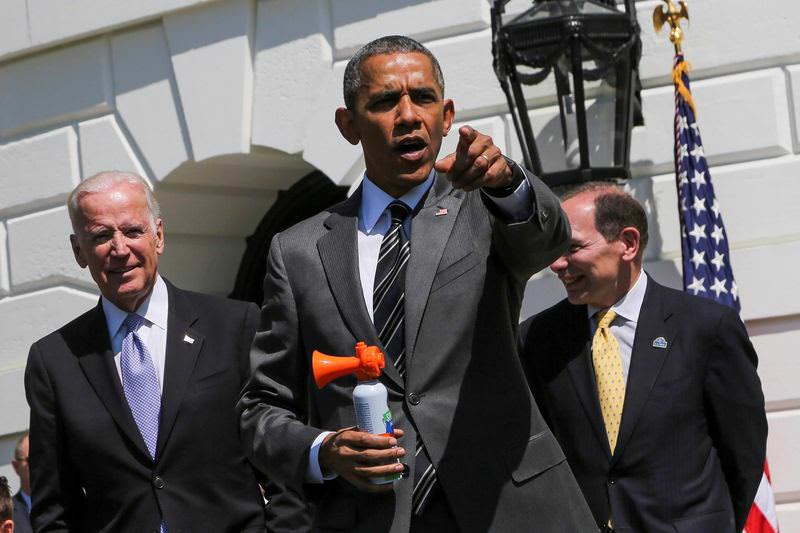 U.S. Vice President Biden, in a speech to the pro-Israel, pro-peace advocacy group J Street, harshly criticized the Israeli government and said the current administration has led Israel in the wrong direction

Vice President Joe Biden acknowledged "overwhelming frustration" with Israel's government on Monday and said Prime Minister Benjamin Netanyahu's administration has led Israel in the wrong direction, in an unusually sharp rebuke of America's closest ally in the Middle East. Biden, in a speech to the pro-Israel, pro-peace advocacy group J Street, offered a grim outlook for peace efforts, reflecting dim hopes for progress during the remainder of the Obama administration. Although he said Israelis and Palestinians shared blame for undermining trust and shirking responsibility, he was emphatic in his critique of Netanyahu's government, suggesting his approach raised "profound questions" about how Israel could remain both Jewish and democratic. "I firmly believe that the actions that Israel's government has taken over the past several years — the steady and systematic expansion of settlements, the legalization of outposts, land seizures — they're moving us and more importantly they're moving Israel in the wrong direction," Biden said. He said those policies were moving Israel toward a "one-state reality" — meaning a single state for Palestinians and Israelis in which eventually, Israeli Jews will no longer be the majority. "That reality is dangerous," Biden added.

Biden, who met in March with both Netanyahu and Palestinian President Mahmoud Abbas, said he came away from that trip discouraged about prospects for peace anytime soon. Still, he said it was the U.S. obligation to guarantee Israel's security and to "push them as hard as we can" toward a two-state solution despite "our sometimes overwhelming frustration with the Israeli government." "There is at the moment no political will that I observed from either Israelis or Palestinians to go forward with serious negotiations," Biden said. The vice president's remarks to J Street, a dovish Israel advocacy group that frequently criticizes Netanyahu, came at the height of a campaign season in which candidates have been scrutinized over their adherence to traditionally stalwart U.S. support for Israel. Ahead of Tuesday's primary in New York, Democratic candidate Bernie Sanders has sparked controversy for saying the U.S. should be even-handed and mustn't always say that Netanyahu is right. Biden also singled out Palestinian leaders, including Abbas, for declining to condemn specific acts of terrorism carried out against Israelis, in a nod to the seven-month wave of Palestinian stabbings and other attacks. He said he didn't know whether Monday's bus explosion that wounded scores in Jerusalem was a terrorist attack, but added that the U.S. condemns "misguided cowards" who resort to violence. "No matter what legitimate disagreements the Palestinian people have with Israel, there is never justification for terrorism," Biden said. "No leader should fail to condemn as terrorists those who commit such brutalities."

Biden's tough talk about a key U.S. partner reflected diminishing patience within the White House as President Barack Obama's term nears an end, compounded by deep disagreements over Iran and a strained relationship between the leaders of both countries. In recent weeks, the Obama administration has left open the possibility that it could support or at least not block a U.N. resolution laying out parameters for a future peace deal, a possibility that Israel has railed against. In another dig at Netanyahu and his Likud party, Biden singled out for praise Stav Shaffir, a young member of Israel's parliament and Netanyahu critic from the left wing of Israeli politics. "May your views begin to once again become the majority opinion in the Knesset," Biden said.

The relations between Israel and the U.S. are in an unprecedented era as it has become visible that the two countries are disappointed with each other's some policies. Israel's decision to build settlements in East Jerusalem during Biden's visit in 2010, stirred the boiling pot even further. The tension between the two allies continued to surface as Obama was overheard at the November 2011 G-20 summit in France commenting to French President Nicholas Sarkozy, "You're fed up with him, but I have to deal with him every day." Such remarks destroyed Obama's attempts to reestablish the relations with Netanyahu by voting against the Palestinian bid for statehood at the United Nations in September 2011. Obama's re-election as the president was perceived as an opportunity to reset the relations, as he attempted to normalize relations by describing the criticism of their relations and disagreement on Iran issue as 'speculation' during his visit in March 2013. Israel's attacks on Hezbollah could also be analyzed as a resurfacing of Netanyahu's disagreement with Obama in his approach to Iran's nuclear program. Despite the U.S. efforts to launch peace talks between Israel and the Palestinian authority, Israel's attacks on Gaza in July 2014, which killed over 2,000 civilians, and the diplomatic crisis which emerged between Pentagon and the White House on sending arms to Israel, reheated the boiling waters.
RELATED TOPICS