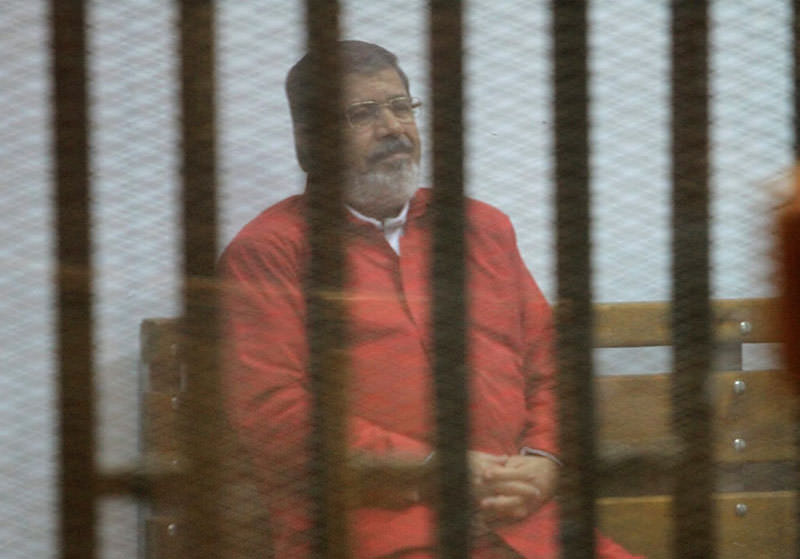 An Egyptian court postponed on Saturday its verdict and sentence in the trial of ousted president Mohamed Morsi, who is charged with spying for Qatar.

The head judge of the criminal court said the verdict was postponed to "May 7 to continue consultations," in brief remarks aired on television.

If he is convicted it would be Morsi's fourth sentence. He has already been sentenced in three separate trials to death, a life term and 20 years in prison.

Qatar was one of Morsi's main backers and Cairo accuses Doha of supporting the Muslim Brotherhood movement.

Morsi -- the country's first freely elected president -- had barely finished his first year in office when the military overthrew and detained him in July 2013.

At the time it announced he would eventually be tried on vague charges of espionage and for a mass prison break during the 18-day revolt that overthrew his predecessor Hosni Mubarak in 2011.

The prosecution charges that Morsi and 10 co-defendants leaked "classified documents" to Qatar.

The documents allegedly contained secrets on "national security," and were allegedly traded with Qatari intelligence for a million dollars.

A court in 2015 sentenced Morsi to death over the prison breaks and attacks on police stations during the 2011 uprising.

He had been detained along with other Muslim Brotherhood leaders days after the protests started on January 25, 2011.

Thousands escaped from prisons after protesters attacked and torched police stations across the country.

Morsi was also sentenced to life in prison for "espionage" on behalf of Iran and other countries, as well as Hamas and Hezbollah.

Another court sentenced him to 20 years in prison for clashes that erupted outside his presidential palace in December 2012 between his supporters and opponents, which killed up to 10 people.

The clashes, after Morsi issued a decree placing his decisions above judicial review, set off spiralling protests that prompted the military to overthrow him.

Since then, a military and police crackdown on his supporters has killed more than 1,000 protesters and imprisoned thousands.

Hundreds, including other Muslim Brotherhood leaders, have been sentenced to death, although many have appealed and been granted new trials.